From "ground truth" to orbiting observatories

Boots on the ground meet eyes in the sky 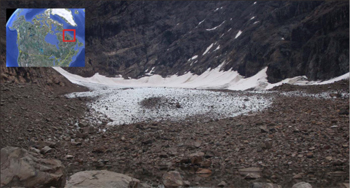 As a mere speck walking across the remote landscape in one of Canada's northern national parks, it is daunting to think of gathering enough information to determine how well that park's environment is faring. Field researchers with Parks Canada know this feeling all too well. Nevertheless, their responsibility for measuring and reporting park ecological integrity is a core part of the agency's mandate. Canada's National Parks cover a total area larger than many countries, and although they are practically uninhabited, these places provide us with unique perspective on trends shaping the environment in the rest of the country and other, more heavily populated parts of the world.

For help, therefore, Parks Canada is looking up - way up. Orbiting satellites, outfitted with a sophisticated array of instruments, can dramatically improve the efficiency of surveying these massive parks. Where a ground-based observer would take years to cover thousands of square kilometres in detail, these eyes in the sky can do so in a matter of minutes, often with accuracy down to the level of a metre or less.

Despite this increasingly impressive capability, however, gaps remain between what satellite show us and what those images tell us. This imagery cannot always confirm a "ground truth" that might be obvious to an observer on site. An example of such truth is the chemical distinction between different types of vegetation, which is crucial to identifying lichens.

In fact, just as lichens represent a symbiosis between two organisms, the data assembled by field observers and satellites can complement one another, providing the quality and quantity of information we need to monitor the largest of our national parks. Parks Canada ecologist Chantal Ouimet has been an active member of the research community developing just such a symbiosis. With the support of Canada's International Polar Year initiative, she has spent the past few field seasons on the ground, working on this new approach to monitoring.

"There's a lot that we don't know about our northern parks, because they're really large," she explains. The smallest of them, she notes, is Vuntut in northern Yukon; it consists of 4,000 square kilometres, while the average size amongst these parks is 18,000 square kilometres. By comparison, Banff is slightly larger than Vuntut, but among the largest of Canada's southern national parks, which average about 1,400 square kilometres.

According to Ouimet, the sheer scale of northern parks forces hard choices on the people working in them. 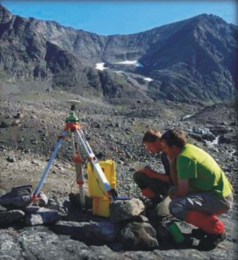 The ground truth is out there: monitoring in Torgat Mountains National Park
© Parks Canada / Chantal Ouimet

"When I looked at how the research was being done in northern national parks," she says, "everybody was going to their favourite place to do their sampling. Somebody would be doing freshwater surveys in one place. Somebody else would be studying tundra 200 kilometres away. And then 500 kilometres farther away somebody else would be looking at glaciers. There was no way of relating the information between these different groups."

By way of addressing this problem, she has embraced an approach that focuses on an individual watershed within a park. By collaborating and exchanging information taken from measurements on the ground in this limited section, the results can be merged with satellite imagery to interpret images collected from other areas in the park. These can be further enhanced with traditional Aboriginal knowledge, which offers insights that neither field work nor satellites could provide.

After rounding up willing collaborators and some specific areas of interest to local Inuit communities, Ouimet took part in a pilot watershed selected from the newest of the northern parks, Torngat Mountains at the northernmost tip of Newfoundland and Labrador.

"We should be able to make links between what we see happening in fresh waters, what we see happening on the tundra, and what is happening with the glaciers," she says. "Our field information provides the ground truth for satellite imagery, while satellite imagery helps us gain information on areas that we have not surveyed from the ground. Then, when satellites indicate changes or new features somewhere else, we can concentrate our field efforts there to obtain more details. This cycle should continue over time to provide, providing more and better information about the park."