Marking the many signs of life in the north

Bringing technology to our newest parks 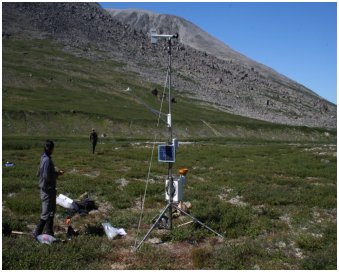 High tech hits the hinterland: checking the weather in a remote valley on the Labrador coast

Parks Canada began looking after key parts of the country’s territory in 1911, but over the last generation the size of those holdings has more than doubled. Since the early 1970s, 12 parks covering more than 219,000 square kilometres have been established in northern regions, representing an area larger than many of the world’s countries.

In fact, the mandate of Parks Canada is even more ambitious.

It identifies 43 distinct ecological zones within Canadian borders, managing a park within almost every one. That diversity might be surprising, especially if you are inclined to think of the country’s northernmost reaches as a single uniform landscape. This vast region includes the Mackenzie mountains in the west, arctic lowlands to the north, tundra in the interior, and rugged Atlantic coastline to the east.

Taking stock of such parks is another challenge. None of the northern parks has a road running through it, and reaching them by boat or air can take days, depending on the weather. Parks Canada does mount expeditions that survey these places on foot — tracking animals, sampling vegetation, or collecting detailed physical measurements of the land and water.

Nevertheless, these activities are expensive, and they can cover only the merest fraction of any given park. Fortunately, the view from above has been getting better all the time. Advanced ground-observing satellites such as the Radarsat and Landsat series have been collecting detailed imagery of the parks for decades, assembling an ongoing database of information about places that few people will ever have visited from the ground.

“It’s the only cost-effective way to do that,” says Robert Fraser, a research scientist with the Canada Centre for Remote Sensing. “You start with intensive field campaigns, and remote sensing allows you to scale it up so you can say something about the park as a whole.”

He has been working with ecologists from Parks Canada on projects supported by Canada’s contribution to the International Polar Year. Among the most significant accomplishments so far has been the development of a system for extracting details from satellite images about the kind of tundra ecosystems that are being seen. The result measures the amount and type of vegetation, and more importantly, can follow changes over time.

In this way, computer software can indicate how plants change on the ground from season to season, as well as from one year to the next. Such details are important to Donald McLennan, who specializes in studying such changes. He is especially interested in what they could indicate about the onset of a warming climate.

“We know that climate is going to change, but we don’t know on a park-by-park basis how that plays out at the park level in terms of weather and ecosystems,” he says.

This approach has already proven valuable in parks located in more southerly regions, yielding insights that might have been elusive even with an unlimited number of field expeditions. In Nova Scotia’s Kejimkujik National Park, for instance, remote sensing data documented an ongoing, 20-year decline in the surrounding forest cover, a change that is compromising animal populations relying on this environment.

McLennan is looking forward to gleaning equally valuable insights from satellites that have been monitoring northern parks. In this way, he expects Parks Canada to be able to live up to its founding commitment of preserving the ecological integrity of these places, and reporting to Canadians on their health.