What the waters tell us

Seeking environmental change beneath the surface 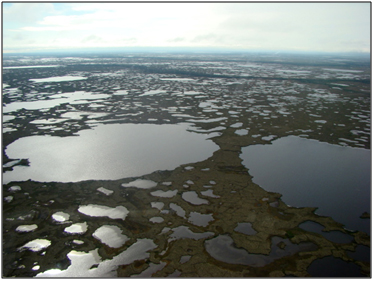 “A land of fog and bog” — that was how 19th century Hudson Bay Company trader James Hargrave described the area of northeastern Manitoba that is now Wapusk National Park. He might not have been able to see past the clouds of insects to appreciate the bountiful wildlife that still characterize this region, which is home to a wide array of bird and mammal species, including substantial populations of caribou and polar bears.

In fact, while Aboriginal inhabitants continue to regard this region as an important hunting ground, they might be more inclined to travel there in the winter, when the ground is frozen. At other times of the year much of the park reverts to a blend of water and land. Seen from the air it is a dazzling patchwork of ponds and lakes, yet most of them are shallow, often no more than 10 or 20 centimetres deep. This landscape makes for difficult footing and slow going.

Jon Sweetman knows this all too well. As an ecologist with Parks Canada, he has spent the past few summers conducting the first comprehensive sampling of those many different bodies of water. The most efficient means of doing so was to hop from one place to the next by helicopter.

Teaming up with Queen’s University biologist Shelley Arnott and a field crew, they collected zooplankton, microscopic organisms forming the cornerstone of the intricate predator-prey network in aquatic habitats. Similar collections had been made in places outside of the park boundaries, but there the water sits on the solid granite bedrock of the Canadian Shield. In Wapusk, however, most water sits on a layer of frozen peat. “As you go further into the park, it’s quite different and very diverse,” says Sweetman. “It’s not a uniform arrangement of water. In some areas there are hundreds of little ponds. Sometimes there’s one big pond; sometimes they’re much more isolated on the landscape. You also get a different array of organisms.”

You can even find entirely different types of zooplankton occupying ponds that are right next to each other, he adds. That raises questions about whether any of these waters are connected with one another in some way, and how resilient they are to potential environmental changes, such as climate warming.

The answer could have profound implications for the future of this region, as well as other parts of Canada. Wapusk holds some of the most southerly collections of permanently frozen soil — “permafrost” — to be found anywhere in the world. That makes it a sensitive frontier for changes in temperature, which have been steadily rising from year to year. Eventually, the amount and extent of permafrost in Wapusk is expected to diminish or disappear altogether in many parts of the park.

At that point, the landscape could change dramatically. Thawing ground may result in a rapid expansion of lakes. Elsewhere, that soil may shift and the water on top could simply drain away, or slowly evaporate as warmer and drier conditions occur. For the zooplankton and others that depend on this water, the result could be a biological bonanza or a disaster.

Before any of this might happen, therefore, Sweetman and his colleagues have already compiled an inventory of the aquatic environment as it exists right now. This provides the necessary starting point for determining the extent of the changes to come, if and when they happen. 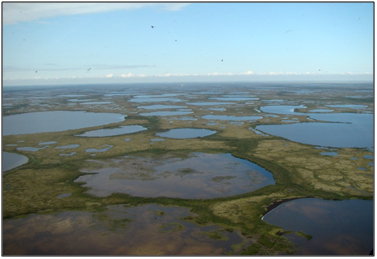 Dramatic changes to the landscape may occur, as ponds might expand, dry up or drain with climate warming
© Parks Canada / Jon Sweetman

This work took place as part of the International Polar Year (IPY), a multi-national research initiative that brought thousands of researchers from dozens of countries into the world’s polar regions during 2007 and 2008. Several of these projects focused on Canada’s northern national parks. Similar studies of water-based organisms were conducted at four other national parks in Canada’s north — Nahanni, in the Northwest Territories, Sirmilik and Quttinirpaaq in Nunavut, and Torngat Mountains in Newfoundland and Labrador.

These parks vary widely, offering landscapes ranging from high Arctic coastlines to lofty interior mountains and majestic coastal fjords. But the work that has taken place in each of them has a common purpose: to define and evaluate what Sweetman and his colleagues call ecological integrity. This concept lies at the core of Parks Canada’s mandate, which makes a priority out of whether the balance of natural activities within any given park remains vibrant and healthy.

Those activities can take unexpected directions, as a changing climate may ultimately demonstrate. Whether the outcome compromises the integrity of the park environment remains to be seen, though what happens next could prove to be even more surprising and dramatic. But as Sweetman argues, the only way we can be sure is to start watching and keep watching.