Ecological integrity: A view from the water 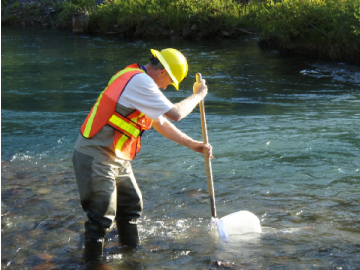 Just over 300,000 square kilometres of Canada’s total area falls under the purview of Parks Canada. Besides approaching or exceeding the size of many countries, these parks capture dozens of distinct ecological regions. Some — such as the high arctic coastline of Quttinirpaaq or the majestic fjords of Torngat Mountains — capture extraordinary physical features. Others, such as Wood Buffalo or Point Pelee, preserve the settings of particular plants and animals.

Insofar as each of these places represents a vital point of access to the natural world, Parks Canada ’s mandate directs this agency to manage and present their ecological integrity. The responsibility for each park extends to protecting the balance of processes that sustain its plant and animal populations, along with active processes that support biodiversity. Researchers can monitor these processes, which include such factors as the behaviour of predators or the complex and interactive impacts of fire. Just as importantly, the establishment of the country’s northern parks has depended upon collaboration with members of local Aboriginal communities, whose traditional activities there are taken to be an integral feature of the land itself.

Northern national parks took on a special significance during 2007 and 2008, a period designated as the International Polar Year (IPY). Throughout the Arctic and Antarctic, thousands of researchers from dozens of countries took part in expeditions dedicated to enhancing our understanding of the changes taking place in these regions. Four of these multinational initiatives have been mounted over the last 130 years, a concentrated effort that has significantly accelerated progress across a wide range of scientific disciplines.

During this latest IPY, several projects concentrated on setting the stage for programs of ongoing ecological monitoring. More specifically, participants examined the best ways of taking stock of these huge parks with the help of the latest technology and many people in the field.

In Nahanni National Park Reserve, for example, a recent expansion increased its area by more than six times in order to protect most of the lower part of the South Nahanni River watershed. This region’s unique geology and spectacular terrain has created a rich diversity of stream and rivers flowing through the region. As part of IPY, Parks Canada scientists worked with investigators from the University of Waterloo to study some 70 waterways in this newly added park territory, sampling water chemistry as well as plants and animals sustained by that water. The results provide a baseline to assess any future impacts to streams in the area from human activities, such as mining and climate change.

Water plays an even more prominent role in the ecological integrity of Wapusk National Park. This landscape is dominated by more than 10,000 ponds and lakes, but prior to the IPY, very little research had been done on any of them. The support from IPY made it possible for Parks Canada and scientists from Queen’s University to take samples from 92 distinct sites, measuring water chemistry and other physical information, as well as studying the zooplankton that form a key part of the aquatic food chain.

Because Wapusk lies on the boundary between boreal forest to the south and arctic tundra to the north, it displays a transitional biological diversity that will change dramatically as the average annual temperatures in this region continue to rise. This kind of warming would also produce major effects in Torngat Mountains National Park, which have also lacked sufficient baseline information about its freshwater environments. Working with members of the University of New Brunswick’s Canadian Rivers Institute, Parks Canada staff there tested methods for measuring decomposition and productivity in northern streams, two factors that are expected to change significantly with climate warming.

Much of this IPY activity explored methods for monitoring freshwater sites in the Arctic. While suitable methods have been developed for such work in southern locations, a different approach is demanded in the north, where growing seasons are shorter, biodiversity is lower, and simply gaining access to monitoring sites can pose significant logical challenges.

A final initiative, where aquatic sampling becomes formally linked with terrestrial sampling, is being piloted in the Ivitak watershed in Torngat Mountains National Park. This is a cooperative study where scientists will work together to understand and assess ecological changes in a holistic and connected way, studying diverse environments from glaciers to streams to tundra to marine ecosystems. The overall objective will be to understand how individual ecosystems interact, as well as how the entire watershed ecosystem is responding to environmental changes such as climatic warming. Over time, the findings should make it possible to combine scientific and local Inuit perspectives for an even broader understanding of this new park’s ecological integrity.

Stories from the field: