In collaboration with Indigenous partners and other federal departments, Parks Canada is taking action to support the recovery of Southern Resident Killer Whales through monitoring, education and enforcement.

The first thing you usually see is a black dorsal fin, accompanied by a puff of mist and a whoosh—the whale’s exhalation.

The dorsal fin is shaped a bit like the keel of sailboat; the taller fins usually belong to the males.

Next the long black-and-white body emerges, tracing a shallow curve just above the surface. The blowhole closes; the rainbow created by the exhalation fades. Then whale becomes water again.

When a killer whale surfaces for a breath, human onlookers tend to hold theirs.

Also known as the orca, the killer whale is one of the most iconic and well-studied species on the West Coast.

One population in Canada—the Southern Resident Killer Whales—is endangered, with only 75 whales remaining in the population (as of March 2021). They face three key threats to their survival: contaminants, a decline in the availability of Chinook salmon (their main prey), and physical and acoustic disturbance.

But help is at hand for these charismatic and important animals.

In 2019, the Government of Canada announced an enhanced recovery strategy for the Southern Resident Killer Whales.

Parks Canada, Fisheries and Oceans Canada (DFO), Transport Canada (TC) and Environment and Climate Change Canada (ECCC) have all identified activities and measures to help with the conservation and recovery of this population.

Portrait of an icon

Like humans, killer whales breathe air, produce milk, take naps (although with only one brain hemisphere asleep) and create their own patterns of communication from a large repertoire of sounds.

Hold up your hand; you are looking at a killer whale’s front flipper, with some external modifications. The bone structure underneath is very similar.

And like us, killer whales lead complex social lives.

This was poignantly brought home to the public in the summer of 2018, when one of the female southern residents, J35 (also known as Tahlequah), was seen carrying the body of her dead calf with her nose and head for 17 days and 1,600 kilometres.

Mourning behaviour has been observed before in killer whales, but never for such a long time. And the loss of just one calf is a real setback for the population, due to their low reproductive rate.

Scientists are studying the role of Chinook Salmon as a food source for female Southern Residents to produce healthy calves. In the Kennedy Flats Watershed, adjacent to Pacific Rim National Park Reserve, Parks Canada has been working to restore and monitor habitat for salmon as well as smaller fish that are eaten by salmon.

The recently announced 2021 management measures to protect Southern Resident Killer Whales state that boats must keep 400 metres away from killer whales in all southern BC coastal waters between Campbell River and just north of Ucluelet, including Barkley Sound and Howe Sound.

In all other Canadian Pacific waters, you must stay 200 metres away from killer whales. Boats are also asked to reduce their speed to less than 7 knots if they are within 1,000 metres of the whales.

Killer whales can sound like gulls crying, rusty hinges working, synthesizers trilling, and aliens (the warm-blooded, social kind) whistling and squealing. Each “pod” or family group has its own dialect of sounds that distinguishes it from others.

Killer whales use echolocation to hunt and navigate. If you listen to a tape of their calls, you will hear clicks interspersed among the exotic sounds. The clicks send back echoes which allow the whales to discern the shapes ahead of them.

This is why a quiet sea, free from noise pollution, is so important to their survival.

Interim sanctuary zones for killer whales have been created off Pender Island and Saturna Island (in Gulf Islands National Park Reserve) and at Swiftsure Bank (just outside of Pacific Rim National Park Reserve waters). Parks Canada is involved in enforcing these sanctuary zones; boats are not permitted in these areas from June 1 to November 30, 2021.

And there is always the important task of inspiring visitors and communities to protect the whales.

“I’m thrilled to work in a park reserve where people can see whales from land,” says Athena George, an interpreter at Gulf Islands National Park Reserve. “We have had evenings where a guest musician played fiddle at sunset while 30 or 40 Southern Resident Killer Whales swam past.”

Maybe one of the most important messages from Parks Canada is that killer whales are amazing creatures—“fellow nations,” as the naturalist Henry Beston wrote of animals in general, “gifted with the extension of the senses we have lost or never attained, living by voices we shall never hear.” 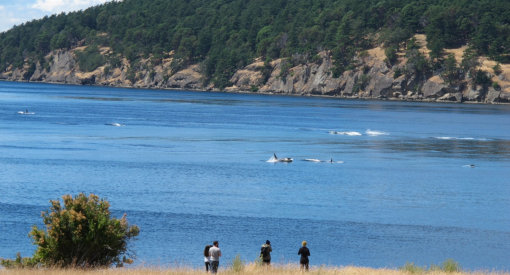