Forests at risk in Newfoundland and Labrador

Managing a forest at risk 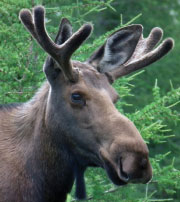 Moose can affect how the forest re-grows

When an ecosystem, such as a forest, is healthy, its communities of plants, animals and other organisms are usually also healthy, and its biological and physical processes function naturally for the long-term.

Although moose were only introduced to the island a century ago, they have had a significant impact on Newfoundland forests. With few predators, their numbers have increased to the point that they are significantly damaging forest ecosystems. Moose eat young trees in winter and, in some places, have removed even common species such as balsam fir from the forest. As a result, the forest is not re-growing, but is turning into shrub barrens or meadows in large parts of both Gros Morne and Terra Nova National Parks. This change not only reduces moose food supply, it also damages the ecosystem’s ability to support the other animals and the plants that once lived there.

Without adequate food, the moose population will continue to decline and eventually crash, but by that time much of the forest within the national parks will be gone. Across Canada, and throughout the world, other agencies have faced similar issues with over-abundant species. Examples include white-tailed deer in Point Pelee National Park and elk in Rocky Mountain National Park (USA)—in each case one species has flourished at the expense of the ecosystem on which it depends. Healthy forest and healthy moose are what Parks Canada wants. 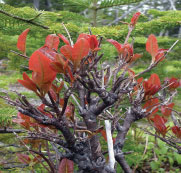 An approach to improve forest health

After studying the feasibility and safety of a variety of management options, consulting with the public, and evaluating the experiences of other agencies, Parks Canada has made a difficult decision. To protect the forest, some moose must be removed, by lethal reduction, from both national parks.

Through a multi-year program, the moose population will be reduced to a level that decreases browsing pressure, allows for adequate forest regeneration and ultimately improves the health of the forests. This moose population reduction will be implemented with the participation of the Government of Newfoundland and Labrador Wildlife Division’s Big Game Management System. 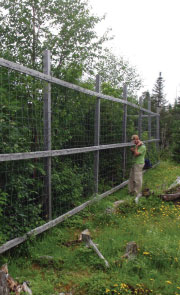 As the moose population decreases, Gros Morne and Terra Nova will use other management techniques to speed forest recovery including: tree planting, seeding, site preparation and weed control. Tree planting and seeding will give the forest a head start in repairing itself. Site preparation and weed control will remove competing vegetation in order to increase success of tree establishment and growth.

How will parks canada know when it has been successful?

The effectiveness of Parks Canada’s moose population management and the degree of forest health recovery will be measured by vegetation response. For example, balsam fir and some hardwood species will be monitored for increases in height and stem density. As the vegetation begins to regenerate, Parks Canada will determine the number of moose the forest ecosystem can sustain.

How can I get involved?

Public help is necessary for the moose reduction to succeed. If you are interested in helping improve forest health in Gros Morne or Terra Nova National Parks, select either park as one of your area choices in your Newfoundland and Labrador Big Game Licence.

Collapsed fir stand with little signs of regrowth after 20 years