Forests at risk in Newfoundland and Labrador

Moose have become too numerous in Gros Morne 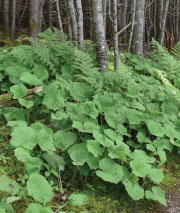 When we think about national parks in Canada, we usually think of pristine forests. In Terra Nova and Gros Morne national parks, however, the forests are not healthy. Young trees are gone from the understory, the natural diversity of native plants and animals is decreasing, and the process of forest re-growth is breaking down. Long-term research and monitoring has shown that intense moose browsing over decades has interrupted the normal process of forest regeneration.

Moose were introduced to the Island of Newfoundland just over a century ago. With lots of food, few predators, and little disease, their numbers have increased spectacularly. Although the forest ecology of Terra Nova and Gros Morne is slightly different, both national parks are now managing the effects of such high numbers of moose. 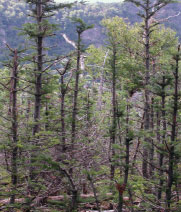 Young fir trees with branches browsed to the trunk

Parks Canada is faced with a difficult choice. If something is not done about moose, soon there will be little forest left. Research, local consultation, and the expertise of other agencies around the world that have faced similar problems show that there are few options. The consensus is that the moose population must be reduced. Parks Canada has developed a Hyperabundant Species Management Plan that guides the moose reduction by qualified harvesters that began in the autumn of 2011.

The moose population will be managed in co-operation with the Wildlife Division of the Government of Newfoundland and Labrador, using the provincial big-game licensing system. Other strategies will be used to speed forest recovery, such as invasive weed control, tree planting, and in Terra Nova, fire management.

How the forest normally functions

Normally, boreal forest regenerates itself. Older trees killed by insects, disease, and windstorms, are usually replaced by saplings that have grown slowly in their shade, and by seedlings stimulated by sunlight reaching the forest floor. In this way the forest re-grows generation after generation. But moose have broken that cycle in Terra Nova and Gros Morne National Parks.


What is happening to Gros Morne National Park’s forests?

Gros Morne was established in 1973, and since then there has been no hunting of moose within its boundaries. Moose numbers climbed until the forest started to show obvious signs of stress. By 1998 there were about 7 800 moose within the park and concern about the forest was growing. The most recent survey in 2007 showed that the population had declined to about 4 800, however, the density of moose in the lowland forest of Gros Morne is still 5 to 20 times higher than in other parts of Canada. 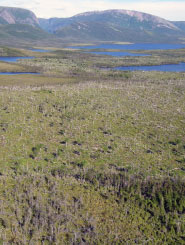 Moose are heavy eaters. In summer, moose eat fast-growing leafy green vegetation; but it is in winter that they have the greatest effect on the forest. In winter they depend on the slow growing twigs of woody plants. Each moose can eat 20 kilograms of twigs per day. Over the course of a winter, 4 800 moose eat a lot of forest.

The park is now at the stage where 65 square kilometres of once-healthy forest have turned into treeless moose meadows and remnants of forest stands. In disturbed forest, 75% of the stands no longer contain enough young trees to regenerate when the mature trees die. Fast-growing native and non-native weeds are invading clearings in the damaged forest stands and smothering small trees that attempt to grow.

Several species of forest birds are in decline as their nesting habitat disappears. Monitoring plots show a 25% decrease in diversity of forest floor plant species. Throughout the forest there is a 72% decline in the favourite food plants of moose. From the air, the extent of the damage is obvious, and even where forest seems to survive, much of it is just mature trees with no younger generation in the understory to take their place.


What is happening to Terra Nova National Park’s forests?

Established in 1957, Terra Nova National Park protects 402 km2 of landscape, 69% of which is forested. Moose have always been protected within the park and in the mid to late 1990s, their population peaked at 650 individuals. Currently, the park moose population is estimated at 200, still well beyond what the forest can sustain. In summer, moose eat fast-growing leafy green vegetation. However, they have the greatest impact on balsam fir in the winter, when they depend on the slow-growing twigs of woody plants. Each moose can eat 20 kilograms of vegetation per day. 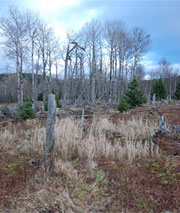 A forest stand converted to moose-meadow by browsing

The forest is Disappearing

To date, a staggering 73 km2 of forested land (balsam fir and mixed hardwoods) in Terra Nova National Park have been negatively impacted by moose browsing. Of this impacted forest, 13 km2 have been completely transformed into open fields where there are not enough trees to regenerate the forest. This is equivalent to 8 231 hockey rinks! In balsam fir forest, research has shown that moose can remove as much as 98% of the saplings. In areas of mixed hardwood forest, moose consume an average of 82% of the available browse. Moose are also reducing the abundance of understory shrubs such as wild raisin, chuckley pear, mountain holly, red elderberry, Canada yew and wild raspberry.

Moose are impacting more than just trees and shrubs. The forests of Terra Nova National Park are home to many species, including threatened and endangered wildlife and vegetation. Moose are removing their habitat and decreasing the diversity of plants and animals in the park. Without action, we will continue to lose the ecosystem that Terra Nova National Park was created to preserve and protect.