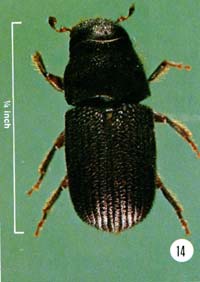 The mountain pine beetle is a naturally occurring insect of the Rocky Mountain ecosystem. These small cylindrical insects attack and kill mature trees by boring through the bark and mining the phloem - the layer between the bark and wood of the tree. When conditions are favourable, populations of the mountain pine beetle can increase and large numbers of trees can be infected, killing large areas of mature lodgepole pine.

This natural process is important to the forest ecosystem because, as a natural disturbance, it sets the stage for forest regeneration.

Mountain pine beetles normally have a one-year life cycle. In late summer, adults, which are approximately 5 mm (1/4") long, leave the infected trees in which they have developed. They then seek out living, green trees that they attack by tunneling under the bark and search for mates. 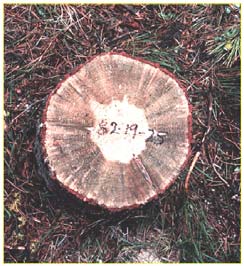 The beetles tunnel into the tree and lay eggs in vertical galleries under the bark. After the eggs hatch, the grub-like larvae spend the winter feeding under the bark. Larvae pupate in the spring and emerge as adults from July to September.

A key part of this cycle is the transmission of blue stain fungi from the beetle to the tree. Spores of these fungi are introduced by adults into the tree during colonization.

Fungi grow within the tree and, together with bark beetle feeding, weaken it. This mutual network of beetle galleries and blue stain fungi disrupts the movement of water within the tree and rapidly kills it. The fungi give a blue-grey appearance to the sapwood.

What to look for: 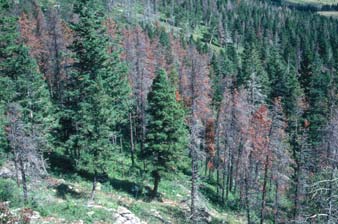 What is the history of mountain pine beetle in the mountain parks?

In 1997 the annual insect and disease survey found that beetles had dispersed across the Continental Divide into the Brewster Creek, Healy Creek and Bryant Creek drainages of Banff National Park. Since then, the beetle population has grown and migrated eastward into the warmer, drier forests of the Bow Valley, including areas outside Banff National Park.

What are we doing about mountain pine beetle?

To achieve both of these objectives, Banff National Park has established two different areas where different strategies are applied: 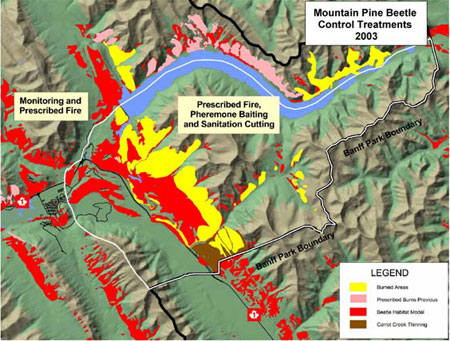 Natural Resource Canada’s Canadian Forest Service released its annual Forest Conditions report for Banff National Park. The report summarizes the findings from the past season’s aerial and ground surveys for forest insects and disease. The activity of mountain pine beetle in Banff National Park expanded in 2008 with over 7000 newly discoloured trees mapped throughout the park. Results from last season’s overwinter mortality surveys indicate that the success of mountain pine beetle populations is variable across the park with some populations continuing to thrive (e.g. in the Fairholme area) while others are in decline (e.g. in the Turbulent Creek area). The report also indicates that mountain pine beetle populations are experiencing multi-year life cycles and delayed flights to new host trees.

Mountain pine beetle is a dynamic ecological process that has both large scale ecological benefits within the park and the potential for large scale economic impacts on industrial forests. As such, it requires an adaptive management approach that integrates the objectives of many land managers and interest groups.