Generations of North Americans have been raised with Smokey the Bear extolling us to prevent forest fires. Seeing firefighters lighting fires near a wildfire, instead of spraying water on it, may create confusion. "Why are they making the fire bigger? is a common question.

The truth is that deliberately lit fire is a very important weapon in the firefighter's arsenal. Fire fighting techniques can be grouped into two broad categories direct and indirect control.

Direct control suppresses the fire through putting water or retardant adjacent to or directly onto the fire from helicopters, airtankers or hoses. Direct control works best on smaller fires or slow burning fires and is also used when people and structures are at immediate risk.

Direct control is less effective and extremely dangerous on large, active fires. Extreme fire behaviour is usually accompanied by high winds, blowing embers, high temperatures, unpredictable air currents, and massive amounts of smoke. This may create situations that are too risky for ground and aerial attack. 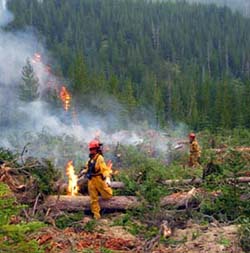 Hand igniting a burnout ahead of the main fire. © Parks Canada/Gord Irwin/August 2003

Indirect control establishes a fireguard in the path of the fire and takes advantage of favourable terrain and natural firebreaks. The fireguard is created by physically removing fuels or through coating fuel with retardants to reduce its flammability. With the fireguard established, the unburned fuels between the guard and the wildfire are burned out, when conditions allow, using hand drip torches or by aerial ignition with drip torches or ping-pong balls filled with self-igniting chemicals.

Burning out allows fire managers to choose the time and place that the fuels get burned rather than remaining at the whim of fire behaviour and weather. Indirect control is used when there is space and time to establish an extensive fireguard. It is sometimes the only way to protect structures in the fire's path.

Fires may also be lit to create air currents in order to draw the main fire, smoke and lofted embers toward or away from some areas.