Why is fire important?

Fire is a natural disturbance agent that has helped create the landscapes we see in the mountain national parks today. Some areas, like the montane grasslands, have been subject to frequent fires over many centuries and are considered fire-dependant. These ecosystems require fire in order to restore and maintain ecological integrity.

Fire is such a powerful and pervasive ecological force that areas that experience fire only once every few centuries have plant communities that reflect their fire history. Some of these places are high elevation alpine meadows and subalpine forests.

What is the role of fire in an ecosystem?

Fire plays many important ecological roles in ecosystems that cannot be duplicated by any other natural process. Fire affects the processes that occur in an ecosystem (=function), what species live in the ecosystem (=composition) and how those species, particularly plants, are arranged (=structure).

Effects of fire on FOREST STRUCTURE

Fire produces a mosaic of plant communities of different ages and species composition on the landscape. Typically, fires burn with variable intensities across the landscape due to changes in terrain, wind and other factors. Areas where the forest is completely consumed by fire are interspersed by patches of unburned and lightly burned forest. In this way fire increases the structural diversity and species diversity of ecosystems over time.

Periodic fire reduces the amount of accumulated fuel on the forest floor (woody debris, dead trees, forest floor litter). This reduces the potential for extremely large, hot fires, which can damage soil and result in increased erosion, and loss of soil fertility.

Effects of fire on FOREST HEALTH

Fire has variable effects on insects and disease that infect trees and other vegetation. Some insect populations are directly destroyed in a forest fire, while other populations are reduced following fire due to changes in vegetation and soil. Wood-boring insects may increase due to increased availability of food in the standing dead trees. Pathogenic fungi and parasitic plants (e.g. dwarf mistletoe) may be at least temporarily removed from an area following a forest fire.The potential for large outbreaks of disease and insects (e.g. mountain pine beetle) is generally reduced in ecosystems with intermittent fire because the resulting vegetation mosaic breaks up contiguous patches of suitable host trees.

Effects of fire on SOIL

Fire releases nutrients bound up in litter and woody debris on the forest floor. Fire reduces woody fuels to ash and consumes the organic layer of the soil. Some of the nutrients are lost to the atmosphere as smoke but fire also releases many nutrients into the soil. This "flush" of nutrients is then available to plants that re-establish in burnt areas. This function of fire is particularly important in the mountain national parks where the rates of decomposition and nutrient cycling are low.

How do plants survive fire?

It is often thought that fire destroys all plants and leaves nothing but charred, barren ground in its wake. However, in areas with periodic wildfire, plants have evolved many adaptations for surviving fire and some actually need fire to reproduce. Plant adaptations to fire include increased seed release, increased flowering and fruiting, fire resistant bark and buds, and vegetative re-sprouting from undisturbed root systems.

In fire-dependant montane forests, the seeds of lodgepole pine ( Pinus contorta ) are only released from their serotinous cones following a forest fire and the seedlings establish quickly on the exposed soil. Trembling aspen in these areas will regenerate vegetatively by producing abundant sprouts from the root system following fire. Some of the sprouts will produce new aspen stems provided that browsing pressure by ungulates is not too high.

The open grasslands in the low elevation areas were created and are maintained by the presence of frequent fire. The fire removes encroaching trees and shrubs and stimulates a flush of new growth in the grass species following post-fire release of nitrogen and other nutrients.

How is wildlife affected by fire?

The affect of fire on wildlife varies according to the intensity and duration of the fire, season of burning and the ecosystem that is burned. In general fire increases the abundance of shrubs and grasses that herbivores such as elk and deer feed on. Fire also results in increased availability of berries that form an important part of the diet of grizzly and black bears.

Fire affects the quality and quantity of habitat for wildlife. In general the amount of cover for animals is reduced when the forest is opened up by fire. However moose, elk, and deer benefit from the increased amount of "edge" created by the post-fire vegetation mosaic. This patchiness of vegetation following fire also increases the diversity of habitat types across the landscape.

The habitat of many small mammals is temporarily destroyed by fire. Old forest dependant species such as caribou, marten, and fisher are negatively affected by fire due to loss of cover and food resources.

Fire is not the only natural disturbance agent that shapes the landscape of the mountain national parks. Other disturbance agents such as insects, disease, avalanches, wind and flooding work on a local scale to create and maintain diversity in park ecosystems. These disturbance agents fall into two main categories: biological (living) and physical (non-living).

Forest insects and disease produce patches of dead and dying trees across the landscape which create gaps in the forest cover. Unlike fire, these disturbance agents generally work on a smaller scale to create openings that range from a few trees to several hectares. These disturbance processes normally play a larger role in structuring ecosystems like subalpine forests where fire only occurs every few centuries than the montane areas of the parks where fire is the pervasive disturbance agent. 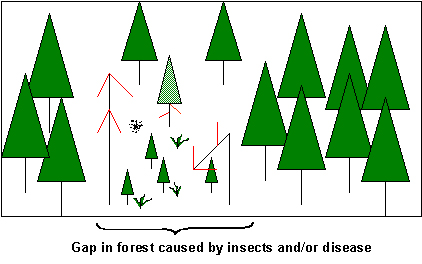 Effect on park ecosystems: Create patches of dead and dying trees. Effects on host trees range from minor deformities to severe stress and death. Fire reduces the risk of severe insect outbreaks by physically destroying insects and by breaking up contiguous areas of suitable host trees.

Effect on park ecosystems: Create patches of dead and dying trees which eventually form gaps in the forest canopy. Effects on host trees range from minor deformities of leaves to root rots that kill the tree. Canopy openings created by root rot are often regenerated by tree and shrub species that are resistant to the pathogen that created the gap. This contributes to the increased species diversity frequently observed in regenerating disease centres.

Effect on park ecosystem: Create large, vertically oriented openings on mountain slopes where the trees are taken down by snow as it comes off the mountain. When avalanches come down in the same place each year, low-growing shrub and forb communities are created in these areas. The vegetation in avalanche paths provides important forage for grizzly bears and moose in mountainous terrain.

Trees blown over by the wind
© Parks Canada

Effect on park ecosystem: Creates large openings or can topple individual trees. Severe windstorms can cause large areas of 'blowdown' where all trees are blown over by the wind. Wind also causes small-scale disturbance across the landscape by breaking tree stems or uprooting trees that have been predisposed to wind damage by insects and disease.