Parks Canada is supporting the work of chemist Audrey Moores, who is developing a method to make biodegradable plastic from the shell waste of crustaceans—including the invasive European green crab.

Marine cockroach, green menace, one of the world’s 10 most unwanted species—the European green crab has been called them all.

But this hated crustacean may help researchers develop a solution to the global problem of plastic pollution.

Parks Canada has partnered with Dr. Audrey Moores, a McGill University chemistry professor, to explore a method of making biodegradable plastic from the shells of European green crabs.

“A marriage made in heaven.” That’s how Chris McCarthy, Resource Conservation Manager for Parks Canada’s Mainland Nova Scotia Field Unit, describes the partnership. And that marriage involves an irony to savour—a green pest ends up serving the cause of “green chemistry.”

The story began when Dr. Moores published a paper on using chitin (the material composing the shells of insects and crustaceans) to manufacture biodegradable plastic.

One of nature’s most abundant building materials, Chitin (pronounced “KYE-tn”) is found in fish scales, fungi and the shells of insects and crustaceans. Like plastic, it is a complex molecule made up of repeating units. Unlike plastic, though, it biodegrades in weeks or months. 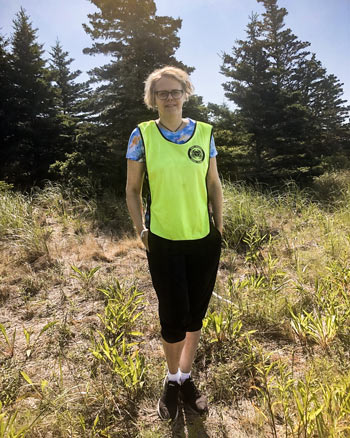 Like many parts of Atlantic North America, Kejimkujik was wrestling with a green crab invasion.

Ms. Beaulieu and Mr. McCarthy approached Dr. Moores about turning their problem into a solution—or at least, into the raw material for a solution.

Dr. Moores “was really taken with what we were trying to do,” says Mr. McCarthy.

The partnership has already resulted in a successful crowdfunding campaign through the Fathom Fund, a project of the Marine Environmental Observation Prediction and Response Network (MEOPAR).

Parks Canada will contribute $20,000 to the project. The funding will allow for the hiring of a full-time researcher on the project, to be based near Kejimkujik.

An enemy of eelgrass

Kejimkujik’s battle with the green crab dates back to 2007, when conservation staff began to realize that something serious was happening under the water. The major symptom was the disappearance of eelgrass.

Eelgrass, a marine flowering plant, serves as a nursery for undersea creatures, including many of Nova Scotia’s commercially fished species. By 2010, eelgrass coverage in Kejimkujik’s Port Joli estuary had dropped to only 2% of 1987 levels.

The loss of eelgrass, says Mr. McCarthy, had a cascading effect. Not only did marine species suffer, but so did the birds that feed on those species.

Adult green crabs rip out eelgrass to get at their food, which includes clams, mussels, oysters, smaller crabs and even small fish.

So far, staff and volunteers have removed 2 million of the crustaceans from estuary locations in the park. As a result, nearly 40% of the original eelgrass beds have returned, and overall biodiversity of the estuary continues to improve.

Kejimkujik had already had some success in encouraging a demand for the green crab as lobster bait and as an edible. This new partnership creates a year-round demand for the crustacean, says Mr. McCarthy.

The project will thus benefit both coastal communities as well as coastal ecosystems—and perhaps ultimately the ocean itself.

Conventional plastic is a major problem for the world’s oceans, since it does not break down and can spread throughout the food chain. One-third of the word’s plastic ends up in the ocean.

Biodegradable plastic is already being made from chitin, says Dr. Moores, but on a small scale—and the methods used can be harmful to the environment. Her approach uses green chemistry to produce the plastic cleanly, on a larger scale.

Chitin accounts for about 15 to 40 percent of a crustacean shell. To separate it out, researchers traditionally use toxic chemicals and lots of water. Such methods also tend to break up chitin’s complex molecular chains, so that only small bits of bio-plastic can be produced.

Dr. Moores’ method involves first using mechanical force—actually pounding the shell powder to help separate out the chitin. She then mixes in sodium hydroxide (lye) to remove protein. Finally, the mixture is aged for six days in a kind of a “steam room” to produce the bio-plastic.

Dr. Moores’ method uses about a third to a fifth of the energy, a tenth of the water and an eighth of the sodium hydroxide used in the traditional process. It also avoids breaking up chitin’s molecular chains, which make the substance so valuable as a structural material.

And so the reviled European green crab may one day actually contribute to ocean health. It’s always satisfying when a black hat becomes a white hat—or at least, a source of ingredients for the white hats’ work.