As alpine ice patches melt, they are revealing archaeological treasures… and now scientists are racing against time to find those relics before they deteriorate.

The earth is “an engine which stores its own history,” wrote the Canadian geologist Digby McLaren, and ice is a dynamic part of that engine. Ask any glaciologist or ice sculptor—ice contains stories.

In 2009, Parks Canada employees Greg Horne and Mike Dillon spotted two small sticks at the edge of an ice patch near Barbican Pass, just outside the western boundary of Jasper National Park.

The employees were intrigued: Barbican Pass is above the treeline, so they knew that the wood probably didn’t originate there. And one of the sticks was tapered, suggesting that it might be a remnant of a tool or weapon.

When the sticks were carbon-dated, one turned out to be roughly 240 years old and the other almost 2500 years old. They were indeed left behind by the Indigenous people in the time before contact with Europeans.

As the earth warms, alpine ice patches are melting out the history they contain—and scientists are scrambling to capture that history before it disappears.

Alpine ice patches form through the accumulation of snow, which builds up year after year and eventually becomes ice. If conditions are right, ice patches can persist even in summer.

Such patches offer a cool refuge for wildlife fleeing summer heat and biting insects. For thousands of years, large animals like caribou, sheep, mule deer and even bison and elk have been climbing up to alpine ice patches.

Human hunters have been coming right after them. And whatever the hunters drop or discard—an arrow, tool or piece of leather—can become encased in the ice.

Unlike glaciers, ice patches don’t flow. So the artifacts can remain undisturbed in these frozen time capsules for thousands of years.

Finding these items is a needle-in-a-haystack pursuit, says Parks Canada archaeologist Aaron Osicki—more like finding new planets in the cosmos than lost coins in your sofa. 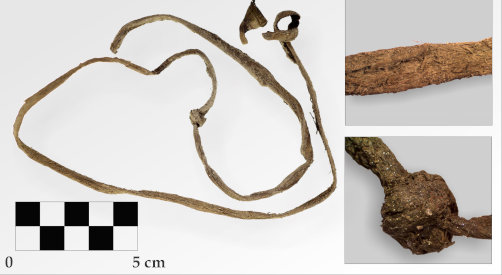 An approximately 270-year-old knotted strip of leather found melting out of an ice patch near the western boundary of Jasper National Park. Photo: Todd Kristensen.

“We try to target a visit to the ice patch at just the right time,” says Dr. Osicki. “It’s rare that we go out on the ice itself—it’s all angles and slopes, and commonly capped with snow—so we usually just circle the patch. We look especially at the lower edges and the drainage channels.”

In addition to the sticks found in 2009, the ice patches of Jasper have yielded a leather strap dated at about 270 years old.

Like peat bogs at lower altitudes, ice patches also preserve the remains of living creatures. Dr. Osicki and his colleagues have found antlers (predominantly caribou, possibly elk) as well as foliage, lichen, mosses… and even a bison bone. Finds like these help scientists understand how this high alpine environment and the creatures living in it have changed over time.

The vanishing archive of ice 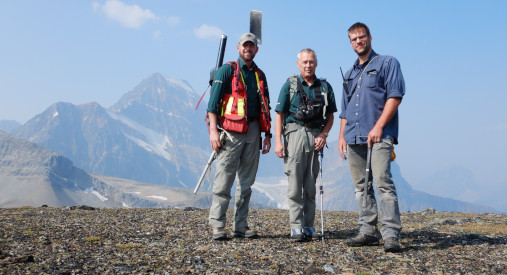 All over the world, ice patches are melting fast and disappearing because of climate change.

Once the delicate artifacts preserved inside them are exposed to the atmosphere, they usually disintegrate within just a few years. So scientists are racing to find these relics before they vanish along with the ice patches that protect them.

Dr. Osicki has witnessed firsthand the retreat of ice patches, having visited Jasper’s Maligne Lake patch in 2016 and again in 2018 – 2019. “It’s very noticeable how much volume has been lost,” he says. “At the current rate, this patch will disappear not in hundreds of years but tens of years.”

This article uses content from the Parks Canada exhibit “Mountains of Change,” which explores the impacts of climate change on mountain parks. This exhibit runs until March, 2021, at Banff Park Museum National Historic Site.