One of the liveliest debates in the history of the Canadian Parliament was that of the spring of 1956, when the construction of a gas pipeline was argued. This daring plan, which was to bring natural gas from Alberta to the heart of industrial Canada, became a national priority for the Minister of Trade and Commerce, the Liberal Clarence Decartur Howe.

But such a project required major capital investment and, in order to obtain it, Howe set up a financial consortium, TransCanada Pipelines Ltd., composed mainly of American businessmen.

In May 1956, when Howe tabled a bill authorizing the construction of a pipeline, predicated on the obtaining of a loan, he found himself facing strong opposition. The bill was attacked from every side. On the one hand, the CCF (Co-operative Commonwealth Federation Party) was pushing for nationalization, while on the other hand the Progressive Conservative Party accused Minister Howe of making the Canadian economy dependent on American capital. 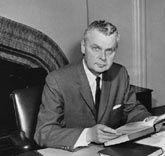 Fearful that these lengthy discussions would delay the beginning of pipeline work until the following year, and pushed by Howe, the St. Laurent Government brought in closure on the debate. This manoeuvre aroused the anger of the Conservative opposition, now directed by a new and energetic leader, John Diefenbaker.

The opposition objected strongly to being muzzled, while the government accused them of obstructing Parliament. On one occasion, there was even a violent scuffle in the House. For several weeks following, the House of Commons was the scene of unruly and unending debates over the pipeline, which degenerated into a battle over parliamentary rights and privileges and ended with personal attacks against St. Laurent. The Prime Minister, who had just come back from a tour in Asia, began to show signs of strain and seemed to be a passive observer of all this political infighting. Finally, on May 22, St. Laurent gave his blessing to the project, declaring that it was acceptable to all Canadians.

However, the pipeline affair tarnished both Howe and the Liberal image and, in some ways, contributed to their defeat at the 1957 federal elections.