The United Nations Organization was set up in 1945. The mandate of this international body is to safeguard peace and security in the world and to promote economic, social and cultural co-operation amongst nations.

In 1945, Louis S. St. Laurent was Minister for External Affairs. He recognised the usefulness of the United Nations, but doubted its effectiveness in wartime. Consequently, at the United Nations' founding congress in San Francisco, in the spring of 1945, he suggested that it should be provided with a peacekeeping force which would ensure the application of proposals adopted by the General Assembly. 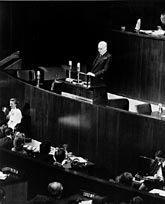 In his first speech to the UN in October 1946, he reiterated this idea. Later, when he was Prime Minister, St. Laurent constantly backed the attempts of his External Affairs Minister, Lester B. Pearson, until, indeed, a peacekeeping force was created in the middle of the Fifties, at the time of the Suez crisis . The Canadian contribution to resolving this crisis won L. B. Pearson the Nobel Peace Prize.

From the very beginning of the UN, Canada co-operated closely in the creation of its various organizational structures. It also contributed to the Security Council, the Economic and Social Council and other constituent bodies. Today, it is most especially involved in United Nations work concerning commerce, space, territorial waters and multinationals.