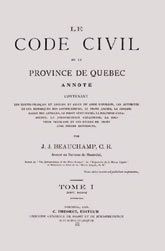 The Canada Encyclopedia defines a Civil Code as a "fundamental legislative enactment which contains a comprehensive and easily understood statement of a nation's private LAW. It is typically found in legal systems whose traditions are traceable to Roman law 1 ." A Civil Code "expounds only on matters of private law [...]. It consolidates the fundamental concepts, rules, principles and ideals of a legal tradition in a clear non-technical style 2 [...]."

Common Law is an unwritten legal system which is based on "decisions handed down by Courts, thus allowing the gradual establishment of principles and rules of conduct whose authority is essentially founded on immemorial use and custom [ Translation ] 3 ." This system applies to most English-language countries and all Canadian provinces, except for Quebec.

From the Custom of Paris to the Civil Code of Quebec 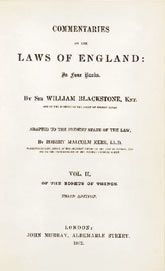 The Civil Code now current in Quebec is based on the Napoleonic Code which, in turn, has a great number of provisions derived from the Custom of Paris which was introduced in New France in 1663. It is thus different from Common Law practised in England and in the other Canadian provinces.

Whereas Common Law is based on non-codified judgments handed down at an earlier time (jurisprudence), the Civil Code is based on provisions and regulations that have already been codified.

In Canada, only Quebec has its own Civil Code. It was in 1857 that the Parliament of United Canada decided to codify all the civil statutes of Lower Canada and to bring them together in one bilingual collection. The Commission of Codification then tabled a new Civil Code which came into force in 1866: the Civil Code of Lower Canada.

Over the following years, in spite of the development of society, the Civil Code hardly changed. Instead, special and independent laws gradually replaced those provisions of the Code which were less adapted to the expectations of a developing society.

In 1955, the Quebec Legislature ordered the reform of the Civil Code. The task was entrusted to the Civil Code Review Bureau. This body dealt first with those matters most urgently in need of reform, before undertaking a complete revision of the Code. In 1981, a new Quebec Civil Code was enacted. However, only certain recommendations involving family law came into force immediately. It was not until 1984 that the new Quebec Civil Code, in ten books, finally replaced the Civil Code of Lower Canada.