Gateway to the St. Lawrence

Opened in 1849, the Saint-Ours Canal and dam are the final section of the Chambly Canal, allowing boats to avoid the last hurdle between Lake Champlain and the St. Lawrence River. As the final link in the Richelieu Canal system, this canal was essential to the development of regional, national and international trade, which used this waterway for over a century. 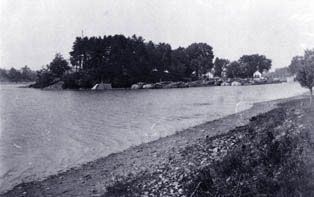 In 1829, the government of Lower Canada appointed commissioners to direct work on the Chambly and Saint-Ours Canals. Financial, administrative and political setbacks delayed the start of construction on the Saint-Ours Canal until 1844, a few months after the Chambly Canal was opened. The Saint-Ours dam and lock were finally finished in mid-September 1849.

Towards the middle of the 19th century, to combat the over-stripping of Vermont's forests, the Americans started importing wood in large quantities. The Richelieu River carried hundreds of barges laden with wood from the Ottawa and Saint-Maurice Valleys. In exchange, boats carried, among other things, Pennsylvania coal to Saint-Jean-sur-Richelieu, Sorel, Montréal and Québec.

Regional trade also benefited from the Saint-Ours Dam and Canal. Thanks to the lock, low-water season was no longer a problem: parishes upstream from Saint-Ours could now send their agricultural produce to Sorel and the towns and villages along the St. Lawrence River.

Like the Chambly Canal, the Saint-Ours Canal played an increasingly important role until the beginning of the 19th century, to which the Canadian-American business era was at its height on the Richelieu River.

Afterwards, train companies competed even harder against them. In 1918, Americans invented the Barge Canal System whose larger locks allowed for bigger boats. Canadians tried to match the dimensions of the new American canals with the Richelieu canals. 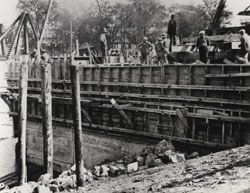 Construction work of the present lock in Saint-Ours in 1931.

The current Saint-Ours lock was built from 1929 to 1933, Westward of the first one. However, the Chambly Canal was never completely widened, limiting commercial navigation. The canal kept losing customers to the railroad industry and trucks companies.

Around 1965, the old wooden dam, built in 1849, was deemed too damaged to efficiently regulate the Richelieu's water level. A new dam was erected in 1967 using a technology then unique in North America: water pressure, not electricity, controlled the floodgates. 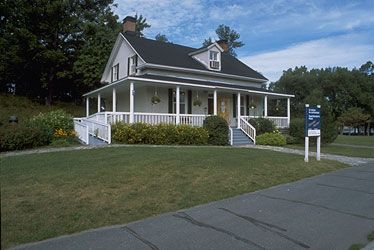 But there are still signs of the old structures: the remains of the old lock, of which only the northeast entrance is visible, as well as the superintendent's house, date from the golden age of commercial navigation on the Richelieu River.