How does a lock work

Most of Canada's canals consist of a series of locks allowing boats to overcome obstacles such as dams, rapids, sandbars and rocky riverbeds. This type of construction is one of the safest, most efficient methods of avoiding obstacles on a waterway.

A lock usually consists of a watertight basin known as a lock chamber, which is used to raise or lower the water level as required. Boats are raised or lowered by filling or emptying the lock chamber. Gates at each end of the lock chamber allow the boats to enter and leave. The gates are operated by various hydraulic, electric or manually operated systems, depending on the canal.

Sluices in the gates or walls of the locks are operated to fill and empty the lock chambers by gravity using the communicating vessels principle.

If the drop that the lock allows boats to negotiate is spread over a distance, a canal is built providing access to the lock.

Other works similar to the conventional lock system perform the same function for boats. These are hydraulic locks and boat lifts. 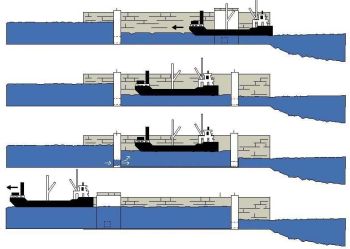 How a conventional lock works

How a conventional lock operates for a boat heading upstream:

For boats heading downstream, the operation is reversed: 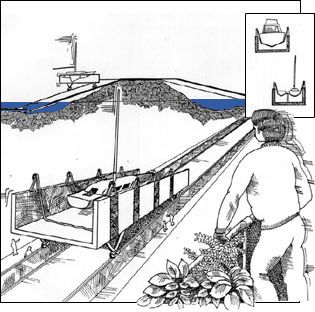 A boat lift consists of a flat wagon mounted on rails linking two bodies of water separated by an obstacle. The boats are towed onto the wagon, which is then hoisted out of the water by a winch at the top of the obstacle. The wagon then goes down the opposite side, into the second body of water.

The boat lift system is used at Big Chute, Ontario, on the Trent-Severn Waterway. It prevents the migration of fish species from one body of water to another.

A hydraulic lock consists of two lock chambers that can move up and down, acting as counterweights to each other, by means of a hydraulic system. Each lock chamber rests on a huge piston. As this piston moves up and down in its cylindrical casing, it pushes on the piston of the other lock chamber, which moves upwards. The lock at Peterborough, Ontario works in this way. 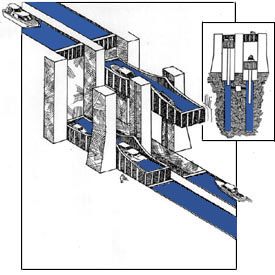