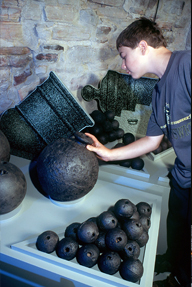 Exhibit of the Grande Maison

Your first stop upon arriving at the Forges is the Grande Maison (the "ironmaster's house"). Our personnel will be on hand to welcome you and give you updates on the activities and services offered.

The Grande Maison, which once was a private residence, an administrative centre, a store and a warehouse, today houses a series of exhibits which recount the exceptional history of the Forges du Saint-Maurice, the first industrial community in Canada.

On the ground floor, you will meet the three most important figures in the history of the Forges. Following this, you will go down into the original cellars of this impressive building.

The cellars feature exhibits of the products which made the Forges famous for more than 150 years. The outfit was initially founded in order to fulfill the needs of the king of France (the Forges and the war). During a second phase, the company contributed significantly to the development of the country (the Forges and the colony). Finally, the Forges played a role in efforts at modernizing iron and steel production in Canada (the Forges and industry). 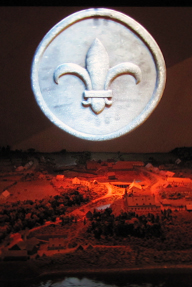 Witness a recreation of the lives of workers at the Forges du Saint-Maurice during a fabulous multimedia show. Combining video projection and simultaneous 3D effects on a big screen as well as on a model representing the village in 1845, this multimedia presentation examines daily life in Canada's first industrial community.

The permanent multimedia show brings to life 20 minutes from a page of history recounting the lives of forge masters and workers who gave birth to the Canadian iron industry in the land of the Mauricie. 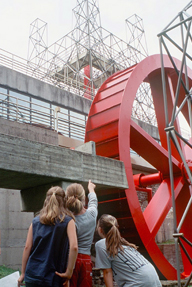 The archaeological vestiges of the blast furnace have been displayed in a way that may be initially surprising. The framework of metal tubing was designed to provide a gauge of the exterior volumes of the various buildings which at one time surrounded the blast furnace, forming an intricate complex with the latter.

The blast furnace was the very heart of the Forges. For more than 150 years, thousands of tons of pig iron were produced on this site, in what amounted to an important first step toward producing castings and wrought iron objects.

Come on in! The inside is as surprising as the outside.

What raw materials went into the production of cast iron? How and where was iron ore to be found? Why were limestone and charcoal used? 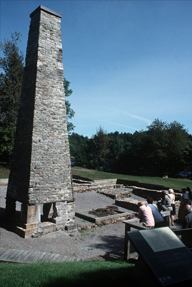 Chimney and remains of the lower forge

By taking the trail along the St. Maurice Creek, you will pass in front of the vestiges of the upper forge and of the flour and wood mill.

You will soon seen a very tall stone chimney, an amazing vestige rising almost 15 m above the ground. It is in fact the chimney of the lower forge, which was built a few dozen metres from the St. Maurice River.

It's a beautiful riverside site you won't want to pass up!

The Young Xplorers of Parks Canada

The Parks Canada Xplorer program is a lively new activity for the whole family.

Six- to eleven-year-olds will enjoy the daring, delight, and fun… On your marks, get set, Xplore!