The Governors at work and leisure

A bit of history 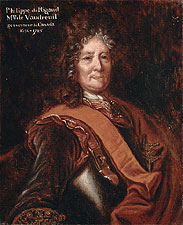 Under the French regime, the governor was generally chosen from the ranks of the military nobility. In contrast, through the 18th century the intendant became more of a career bureaucrat. Quebec's founder, Samuel de Champlain, was never officially governor. Charles Huault de Montmagny became the first. Most governors lived in the Saint-Louis Châteaux from 1648 to 1834.

The centre of executive power, the Saint-Louis forts and châteaux were also largely the colony's seat of administrative, political and military power.

In the 17th century, the governor commanded the troops; the fort accommodated his secretary and a small garrison. Several bureaucrats also occupied the offices.

However, since the château was also the governor's residence, it was an important living environment and cultural centre. There were many receptions, under both the French and English regimes. 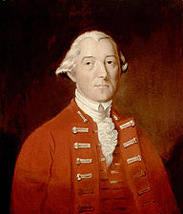 It was common for governors to arrive in Quebec with their own personnel. They consisted above all of secretaries, who were in some cases given permanent appointments (first, second, undersecretary), especially under the French regime. The vast majority of secretaries of French governors would establish themselves in Quebec City after completing their internship in the offices of the governor. Their internships generally lasted the length of their protector's mandate. This was usually a short period, except in the case of Jean de L'Estage, who remained in the service of governor Vaudreuil senior for over 20 years, and of Jacques Lafontaine de Belcour, who remained in the service of governor Beauharnois for the same length of time. Under British rule, the château accommodated the colony's military secretary as well as several officers, in addition to the governor and his personal secretary.

For the most part, governors arrived in the colony with a full household: servants, butler, chef, cooks and bakers, and wine waiters. Frontenac even enjoyed the service of a confectioner, and when he received Amerindian emissaries at the château he would have his confectioner impress them with ice creams of various colours.

A governor's household would generally include five to 10 people. Both French and British governors were proud to call on the service of French chefs. When governor Murray asked his sister to find him a chef, for example, she replied that he could easily find one in Quebec City!

The Château Saint-Louis was a place of cultural activity that included balls and sumptuous meals. Observers from the era were especially struck by the châteaux' receptions. 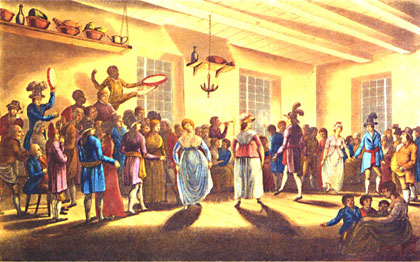 Under British rule, various activities would bring together as many as 400 guests, mainly for balls such as the one given at New Year's in 1826. On the queen's birthday in 1787, the colony's principal leaders and guests of honor gathered at around 11 p.m. before an “artistically arranged” table, which included abundant pyramids of fruit.

Celebrations around the birth of the future Louis XV also apparently left unforgettable memories in the minds of guests:

Once the city was illuminated, and the Governor General was at the Château with the intendant and all the officers, he gave the signal to shoot the fireworks which were prepared on the other side of the river; they were facing the Château. From the centre appeared an arrow from which numerous rockets of different styles shot out with a sun rising from bottom upward and others at all the corners; at the sides there was a Vive le Roi formed by artificial lights that could be distinguished from a half league [2 kilometres].

An arc de triomphe was on the Château's large door, forming three arches held by columns; on the two closest to the middle arch, to the right religion was represented, justice to the left, under the arch on the religion side was a cupid presenting him with a crown and under the arch on the justice side was a cupid showing a sceptre to the divinity to demonstrate that they themselves would learn from the prince so that each would always be crowned, sustained and strengthened. […]

The Governor General had invited all the ladies and persons of distinction to this celebration. At 10 o'clock a magnificent supper was served; the chambers of the Château however grand could not contain the entire assembly; tables were set even on the gallery, which was so conveniently located as to give a panoramic view over six and seven leagues. There was sumptuousness and delicacy everywhere; we drank to the Health of their Majesties and to Monseigneur le Dauphin above the sound of all the artillery. The party ended with a ball that lasted all night. [Archives des colonies, C 11A, vol. 52, fol. 42-49 v, October 1730]