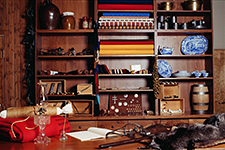 Reenactment of an antique store

For some six millennia, this location and the surrounding area were sporadically occupied by nomadic populations exploiting the resources in the boreal forest. Archaeological artifacts such as stone tools (local and from abroad), ceramics, copper and even corn grains were assembled. These are evidence of the extensive networks of exchange with other Indigenous cultures west of Lake Superior and in places that include James Bay, Lac Saint-Jean and southern Ontario. These networks were integral to the success of mobile societies by connecting families and maintaining the flow of information and material objects.

Around 1680, the first trading post was built on an island at the mouth of the Montreal River, about 30 km southwest of present-day Ville-Marie. It allowed the Compagnie du Nord, a Canadian creation (New France), to compete with the English settlements on Hudson Bay. In response to the capture of three English forts in 1686 by the Chevalier de Troyes in James Bay, this post was burned down two years later by the Iroquois Confederacy (Haudenosaunee), enemies of the Anicinabeg (Algonquin). Although trading activities continued in Témiscamingue, it was not until 1720 that the Compagnie du Nord rebuilt a fur trading post in the current location of the Obadjiwan–Fort Témiscamingue National Historic Site. It was run by various Montreal traders, including Paul Guillet, who was the dominant figure until 1750. Canadian trade flourished there until the English conquest in 1760. Later, various independent merchants took over. In 1795, the North West Company obtained a monopoly on the trade. The Hudson's Bay Company then held one starting in 1821. However, its role would soon change. In 1869, the Hudson's Bay Company divested itself of Rupert's Land, following negotiations led by George-Étienne Cartier. He was undertaking the expansion of Canada's borders, reshaped by Confederation. He felt that the company had treated the "Indians" well and that Canada could count on it to establish good relations with the Indigenous peoples.

After the Hudson's Bay Company left the post for good in 1902, the Hutchinson family acquired it and owned it from 1918 to 1948. Ovide Gaudet then held its shares until 1955. It was then that the community of the Oblate Fathers of Mary Immaculate purchased the old post and kept it until 1970, when it was acquired by Parks Canada. In the meantime, the local population used the site for recreation and celebrations.

Fort Témiscamingue is representative of trading posts in the boreal region. Throughout its existence, it remained dependent on the trapping activities mastered by the Algonquin populations. In addition, some of them began farming in the early 1830s.

Coming up: The terms of the relationship between the Anishinaabeg and the various trading companies at Fort Témiscamingue.