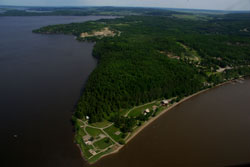 The historic tip of Obadjiwan–Fort Témiscamingue

The Fort Témiscamingue site occupies a prime location on a piece of land formed by a narrowing of Lake Témiscamingue. It is a strait where the two banks come within 250 metres of each other that was marked by a strong current before the construction of a dam upstream in 1911 (source: https://www.cehq.gouv.qc.ca/barrages/detail.asp?no_mef_lieu=X0002996 - French only).

The historic site's territory is mainly comprised of three distinct natural areas: the plateau, the escarpments and the lowlands. Overall, over 80% of its total area is a wooded area with approximately 20 different stands. A number of plants stand in the climatic forest type of the Laurentian maple and the Upper St. Lawrence forest sub-region.

A wold, located at an altitude of 230 metres, makes up the largest part of the site (16.7 ha). Because of the wood harvesting that took place, the red and white pines that used to occupy the plateau were partly replaced by forest canopy where pioneer species such as the large-toothed aspen, the trembling aspen and the white birch prevail. The panoramic view and the general quality of the environment offer potential for use in this area which remains unexploited. 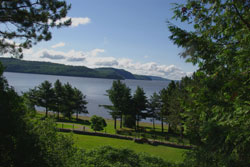 The escarpments (6.1 ha) follow the contour of the point and carve the plateau along the two lake fronts. The cliffs are relatively steep on the west side where the average elevation is 135 metres, whereas the incline is more gradual on the southern slope. A forest of almost pure red pines colonizes these cliffs. The far southwestern corner of the escarpment has a dry Western cedar grove (1 ha). It is a pure stand, over 100 years old, unique on the site and rare in Quebec. Known in the region as the "enchanted forest," this cedar grove is currently one of the main attractions of the Obadjiwan-Fort Témiscamingue NHS. Nearby there is a cabin/workshop. Its location is not insignificant. The log building was constructed in the early 1930s with materials salvaged from the former trading post buildings. The Oblate Fathers of Mary Immaculate (owners of the site since 1955) moved the cabin to its current location around 1963. Their stated goal: to protect the "enchanted forest" by forbidding cars from entering it. Incidentally, the presence of Missionary Oblates dates back to 1844 in Témiscamingue.

Finally, the lowlands (4 ha) stretch in a straight line between the northern and eastern edges through the southwestern point and between the cliffs and the bank of Lake Témiscamingue. These lowlands include the west bank scattered with glaciofluvial blocks; the northern beach, made up of coarse sand, which extends 450 metres in length and, attached to this beach, the area which is most often used by visitors. Immediately bordering the lake, the beach is inhabited by isolated members of hydrophilic species including the willow, the black ash and even the American elm. The arborescent vegetation is found in thickets separated by long stretches of lawn. In this area we can also find the silverberry, this small shrub which is extremely rare in Quebec and is considered to be an endangered species. The cabin occurs in groves located mainly at the southwestern end of the site along the lake shore and near the site of a former chapel on which construction began in 1836 on the initiative of the Sulpicians of Montreal, who were responsible for the religious services in the region until the arrival of the Oblate Fathers.