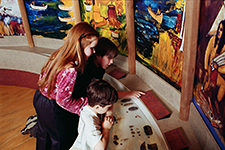 By at least 6,500 years ago in the Archaic period, and throughout the following Woodland periods (3,000 years ago to 1600 Common Era), this place was settled by a succession of peoples whose way of life was seasonally mobile and reliant on the resources of the northern boreal forest. Their campsites are found throughout the surrounding region. Archaeological artifacts such as tools made of non-local stone, early ceramics, copper, and even corn kernels reflect the vast exchange networks that connected them at different times to other Indigenous cultures ranging from west of Lake Superior, James Bay, Lac St. Jean, southern Ontario, and beyond. These networks were integral to the success of mobile societies by connecting families, and maintaining the flow of information and material objects.

the first trade post on this lake was built by the government of New France about 1685 at the mouth of the Montreal River to compete with the English on Hudson Bay. Closed in the 1690s, the post was re-established here in 1720 and leased to merchants until the fall of New France. Thereafter, various free traders settled on Lake Timiskaming, but by the 1790s a monopoly was held by North West Company, and after 1821 by Hudson’s Bay Company.

it is representative of northern boreal trade posts whose operations relied on the skills and support of Algonquin trappers, matriarchs, and their families.

As early as the 1830s, the Timiskaming First Nation supported a succession of missionaries at the post and the establishment in 1863 of the Saint-Claude Oblate mission on the west side of the narrows. Prompted by the mission, the following year Timiskaming First Nation members began farming on lands around the post and along the shores of the lake.

In the 19th century, it was where the Timiskaming First Nation held the traditional elections of Chiefs.