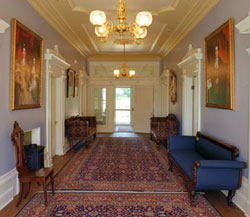 Access to the domain and the manor house road

The Manoir Papineau parking area is located next to the former Montebello railway station, which can be reached by Route 148. At the edge of the parking area is the seigneurial lane. This broad gravel pathway winds through the domain's century-old forest and leads you to the manor house. You can get tickets for guided tours and other Manoir Papineau activities at the tourism information booth located in the former station. 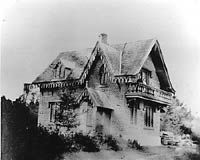 The gardener's cottage located next to the manor house is the northern point of entry to the domain. Today's typical stone and wrought iron gate, flanked by a watchman's hut, replaced the original wood barrier dating to the time of the Papineau family. This Gothic Revival cottage was built in 1855, shortly after the manor house was erected. It was modelled after the traditional cottage then in fashion. The gardener who used to live here controlled access to the domain. This building is now located outside the limits of the Manoir Papineau National Historic Site of Canada. 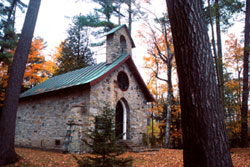 The stone funeral chapel dates to 1853-1854. It is in the "country Gothic" style, as is evidenced by the corner buttresses on either side of the building front, the shallow-arced door opening, as well as the ubiquitous interior plasterwork. All the original furnishings have been preserved intact: the Gothic Revival altar and accessories, an abundance of statues, high relief works as well as memorial plaques. Six generations of the Papineau family were laid to rest either in the crypt or in the adjoining cemetery.

The funeral chapel was entrusted to Heritage Canada in 1974 and classified as a cultural property in the year following. The Société historique Louis-Joseph Papineau is caretaker of the building, and conducts tours of the premises during July and August.

Louis-Joseph Papineau built his manor house on the promontory formed by Cape Bonsecours, thus taking advantage of the outstanding panoramic views out over the Ottawa River. The architectural features of this impressive, eclectic mansion give clear indication of the status of Seigneur Papineau and amply testify to his intelligence and culture.

Erected between 1848 and 1850, the manor house's unique architecture represents a blend of stylistic influences similar in many respects to that which is encountered in contemporaneous neoclassical villas. Its sculpted decor recalls the Greek Revival style. From the river, the house appears as a monumental elevation flanked by two corner towers. The facade and hip slopes of the roof present an overhang of unusual proportions, in a muted reference to the Regency style. The conic roof atop the stair tower built following a fire in 1892 is representative of the Queen Anne Revival. Finally, interior door openings between adjoining rooms were aligned to create particular interior perspectives, in keeping with French architectural tradition. The spiral staircase located in one of the towers also shows the influence of this tradition. The unusual positioning of the main reception rooms to the back of the ground floor, combined with the abundant fenestration on the lower two levels of the east tower, recall that a conservatory was once located here. 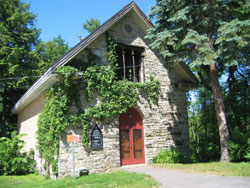 In addition to the manor house, the seigneurial domain originally included a series of outbuildings, several of which have lasted down to the present time. In their own way, these buildings dating to the 19th century evoke various eras of the Papineau estate. Such is the case, notably, of the family museum, which was built in 1880 by Amédée Papineau. The various objects, family portraits, paintings, sculptures, and travel souvenirs have been arranged in the fashion of the "curiosity cabinets" of the time. Amédée found inspiration for the museum at the Maison Carrée in Nîmes, which he visited during a trip to France in 1871.

The rectangular base of this neoclassical building is capped by a double-sloped roof. Each of the gable ends forms a broken pediment. The thoroughly Romanesque Revival facade features a stone wall, a full centre arch doorway, and, above the doorway, a triple window opening framed by colonnettes. 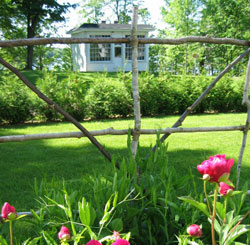 The tea house represents the various phases of occupation of the domain by members of the Papineau family. In particular, the foundations were laid during the era of Louis-Joseph Papineau, and the wood frame structure dates to the time of Amédée. In 1860, Louis-Joseph Papineau had a hen house / dove cot built upon a stone base. In 1887, a greenhouse was built using these same foundations. Around 1913, the greenhouse was demolished and replaced by an Italianate tea house featuring a balustraded rooftop terrace. All four sides of the tea house are glassed-in. At one time, a path from the tea house led to a scenic lookout offering a superb panoramic view of the Ottawa River.

A charming exhibition has been set up inside the teahouse to recreate teatime with the Papineau family, a peaceful moment that members of high society enjoyed sharing. 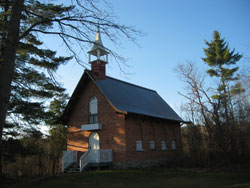 Built in 1855, the granary was first used as a storehouse for the grain given to the seigneur by the censitaires (or settler-tenants) as payment for their rent and dues.

Between 1858 and 1871, Louis-Joseph Papineau's son-in-law, Napoléon Bourassa – a painter, musician, sculptor and writer recognized in the 19th century for his artistic talents – had his studio upstairs in the granary located on the seigneurial domain. On the walls and ceiling can still be found fresco-style working drawings, giving this room an exceptional value and interest. Following a series of procedures spread over several years, the Manoir Papineau National Historic Site of Canada now provides public access to this carefully restored one-of-a-kind resource, bringing out the talent of Napoléon Bourassa.