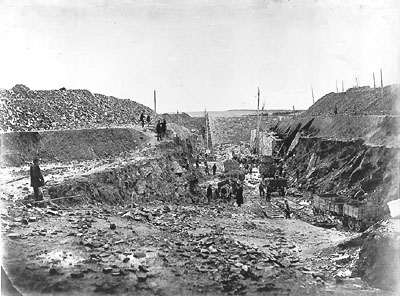 View of the Fort Staddon in the south of England in January 1863.
© Royal Engineers Library, England

The construction of Fort No. 1 was a beehive of activity right from the start. Numerous technological innovations turned it into an ingenious site.

Under the orders of the royal engineers, nearly 500 soldiers, artisans and workers laboured away and invented new methods as they went. Construction took seven years. The fort bears witness to the latest industrial processes of the time and also shows evidence of some interesting technical innovations that were adapted to the site.

Some of the techniques used at various stages in the construction of the fort turned out to be a first in Canada. For instance, when the region was surveyed in 1864, Point Lévy was measured using surveyor's chains with theodolites, a method common in Ireland and England. The technique produced highly detailed maps that even showed roadside crosses and telegraph lines.

Work started in the summer of 1865. Besides the three forts, they had to build the encampment for the royal engineers, a dock on the water and the communications network across the St. Lawrence River. 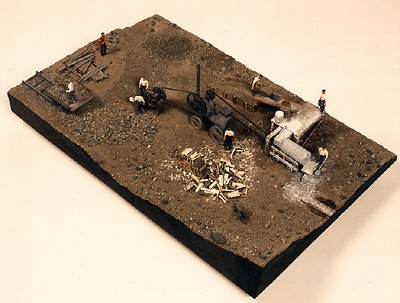 Fort No. 1 was built by the military and was completed in 1872. The other two forts were built by private concerns and were finished in 1869. The ditch had to be dug and cleared out and supported by walls to prevent the sides from caving in. The military did not have enough specialized manpower within its ranks to complete the work, so they turned to the private sector. The inside walls were built of ''Gauvreau'' black Québec cement into stone frames; another first in Canada. Not only were innovative techniques employed but also new types of building materials and heavy equipment. Steam engines were used to run machines such as rock crushers and cement mixers to prepare the concrete. Engineers conducted special experiments to see how the concrete would react to freezing temperatures - an important issue in Québec winters. They also did tests to see if black Québec cement could replace Portland cement and to see how waterproof asphalt could be.

Despite the fact that this was a military site, operations were not kept secret. It attracted a swarm of tourists, mostly American.