The Celtic cross at the Artillery Park 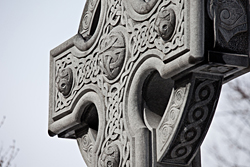 In 1997, when James Gallery, the founder of Strokestown Park Famine Museum, in County Roscommon, Ireland, heard of efforts being made in Québec to obtain a Celtic Cross, he generously donated the cross. More than sixty children from the Mahon estates of Strokestown were adopted in the city of Québec and area in 1847-1848. James Callery wished to honour the Québec families that cared for them.

The cross, sculpted by Aileen Brannigan from blue limestone in the Feelystone quarries, incorporates elements sacred and profane; mythological and scriptural; historical and legendary, themes taken from High Crosses of Ireland. In addition, the year 2000 is marked, and famine ship is in evidence.