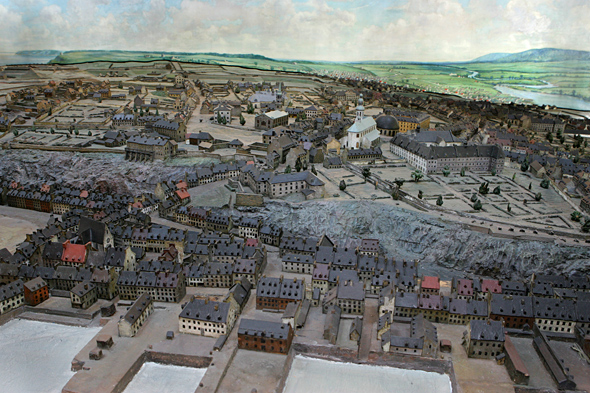 The scale model of Québec

The scale model of Québec City built between 1806 and 1808 by draftsman Jean-Baptiste Duberger and British Royal Engineer John By exemplifies a type of graphic representation widely used by military engineers between the late 17th century and the mid-19th century. This model was completed at a time when major military work were under construction in Québec City. It was most likely intended for British military authorities, considering that it was sent to London in 1810.

Built at 1:300 scale, the model originally measured 6.15 metres in width and nearly 10 metres in length. In 1860, it was foreshortened by one half because, apparently, it was taking up too much room at the Museum of Artillery in Woolwich, where it was being kept. A painting completed by Allan Beddoe in 1925 represents the destroyed portion of the model.

Returned to Canada in 1908 for the tercentenary of the city of Québec, the scale model's condition revealed the lack of maintenance which it had suffered since it had been built. It underwent its first major restoration in 1909-1910 by Father Peter O'Leary. It acquired its current appearance as the result of a second major restoration performed by the Canadian War Museum in Ottawa in 1977-1978.

Returned to Québec City in 1981, this unique artefact offers an outstanding illustration of the urban and military layout of this fortified city in the early 19th century.