The reasons for a defence system

To understand the engineers' intentions at the time, one must take Québec's topography into consideration. In 1690, Québec was already divided into two distinct quarters; Lower Town was laid out on a narrow strip of land running alongside the river. Upper Town was located on the headland which dominated the banks. Lower Town was not protected by a natural defence system. Consequently, several ambitious attempts were made by French engineers to build defence works near the port and link them to the urban layout of Lower Town. However, the quarter was to only be protected by various batteries built near the shore, such as the Royal Battery set up in 1691. 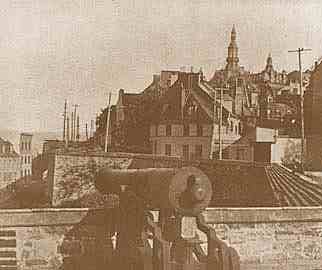 Unlike Lower Town, Upper Town was secured by a natural defence system on two of its three sides; Cape Diamond's steep slope, which rose to over 90 m in height. As a result, only batteries were placed at different intervals to keep watch over the river and a wall that could be scaled. The city's west end faced the countryside and was open to enemy attack. Therefore, a classic rampart had to be built. Defending Upper Town on the west side against a potential siege became the top priority for Québec's engineers.