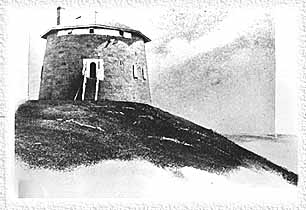 Between 1786 and 1812, under Mann and his successors, the city's ramparts were repaired and new structures erected. A masonry wall, jutting out over the cliffs and stretching from the Palace Gate to the citadel, was put up; with the 1745 enceinte, the wall completely enclosed Upper Town. During the same period, five new powder magazines were set up along the fortifications. Furthermore, extensive repairs were done on the 1745 enceinte. In fact, the front between the Saint-Louis and Ursulines bastions was to be protected by a ravelin, two counterguards, and several flanks covered by tenailles. The Martello Tower, which had only recently been adopted as a defence work for the coast of Britain, was also introduced into Québec's defence system. The tower was generally circular in form, with thicker walls on the sides facing the sea. This work, whose structure is reminiscent of the medieval tower, enabled the military to use fewer soldiers in time of war.