Erected on an exceptional site atop a plunging cliff, the Fortifications of Québec tower over the St. Lawrence River. Encircling Upper Town and covering 4.6 km, their paths offer visitors many unique opportunities. Indeed, the Fortifications' picturesque charm and superb vistas did not only help the defence system to become a tourist attraction immersed in the past, but were also a deciding factor in the system's preservation. Moreover, the Fortifications are eloquent witnesses to Québec's military and urban history.

Like nowhere else in North America, Québec's defence system is of a classic urban style, characterized by the geometry of flanking, defence in depth, and the adaptation to the city's topography. More than just the vestiges of military art of war, the Fortifications of Québec also bear witness to the era of fortified cities between the 17th and 19th century. At the heart of the Fortifications stands the Citadel, which was the ultimate recourse for the British garrison. Its design shows that the builders, living in turbulent times, foresaw both a potential revolt on the part of Quebekers and an attack from the Americans. 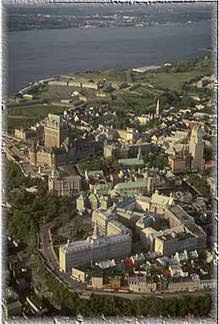 Aerial view of Québec city and the fortifications

When within Québec's defence system, one can sense that the military's presence dominated the city. The parade grounds, esplanades, military arteries, casemate, and warehouse, in which munitions and artillery paraphernalia were stored, are remnants of a city's past that was punctuated by the beat of the war drum.

When Québec was founded, its military works turned out to be a crucial factor in the settlement of the French. Technically speaking, the trading post's fortifications were basically makeshift works that were built to meet the colony's most pressing needs and revealed that European warfare was in a state of transition. The first Habitation, built by Champlain in 1608, was reminiscent of a medieval castle; the structure included a residence, merchandise and supply store, and a réduit for defence with its elevated vertical walls. However, new features were also added to the stronghold. One in particular was typical of the 15th century and provided a place from which to fire artillery; Champlain's "pointes d'éperons", placed in front of both the ditch and vertical walls, resembled 15th -century "boulevards" that were laid out in front of fort walls.

Between 1620 and 1665, a succession of military works replaced Québec's first Habitation. These fortifications, which included the Fort Saint-Louis built on the edge of the cliffs in 1620, and Champlain's second Habitation flanked by small defensive towers (1623), were still rudimentary. The few batteries and réduits that were integrated to main buildings, such as the churches and monasteries, were just as expedient. The works attested to the precarious situation of both the trading post and city, which had only 600 inhabitants in 1665, at the height of the Iroquoian wars. 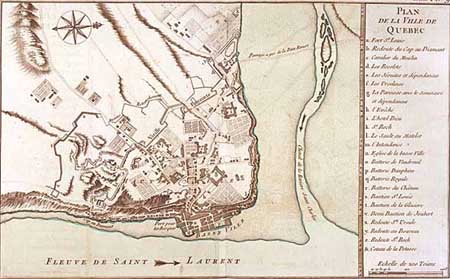 Map of Québec in 1709
© National Archives of Canada.

Québec remained unfortified until 1690; following the fall of Port Royal in Acadia, an enceinte, which consisted of 11 redoubts joined by palisades, was built. The enceinte was designed to protect the city from a coup de main (attack) from the heights of Abraham, which offered the easiest means of approach. This was the first of a series of enceintes built in Québec between 1690 and 1745 in order to fortify the city.