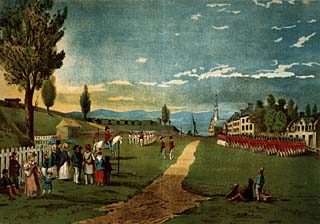 View of the Esplanade in 1832 by R.A. Sproule
© National Archives of Canada


Shortly after the Conquest of Canada, the British victors were faced with new defence requirements. From 1760 to 1775, military authorities feared a reaction from the Francophone population. Furthermore, they were concerned that France would try to recapture Québec. Due to England's economic woes, Québec's defence system was not to be strengthened. Instead, the British took the necessary precautions to preserve the fortifications. One idea nevertheless prevailed: a citadel had to be built. The city's enceinte, deemed inadequate, was virtually ignored for a quarter of a century.

The American Revolution gave rise to the British's first project. Between 1778 and 1783, the army set up a series of wood and earth works, which formed a réduit along the heights of Cape Diamond. Based upon William Twiss' plans, these works were designated as Québec's "temporary citadel." What was most striking about the British's attempts to build a citadel was that Twiss, and even more so his successor Gother Mann, recognized the defence value of the 1745 rampart. After a comprehensive analysis of Québec's defence system, Mann proposed a project that consisted of four specific elements. Mann ventured to: