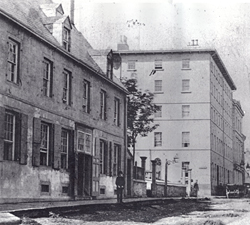 In 1958, the Historic Sites and Monuments Board of Canada recognized the Maillou House as a site of national historic significance, taking into consideration that it is an exceptional example of French architecture, that important figures lived there and that it bears witness to a military presence in Québec.

Located at 17 Saint-Louis Street in the historic district of Old Québec, this building was built around 1737 by Jean-Baptiste Maillou, also known as Desmoulins, one of the most prominent landowners and most successful masonry contractors of the French regime. The Maillou House took on the appearance we know today after an upper storey was added in 1767 and an extension was built in 1799.

In 1815, the residence became the property of the British Army. During this period, it housed the commissariat and treasury, and accommodated senior officers until the troops left in 1871. After that time, the federal government took possession of the building, which notably became the headquarters for the militia and army for almost 60 years. The Department of Northern Affairs and National Resources (Parks Canada) took ownership in 1958. 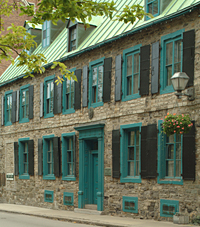 Since 1959, the building has housed the administrative offices of the Chambre de commerce de Québec, which leases the premises. In 1959-1960, Parks Canada and the Chambre de commerce undertook major restoration of the building’s interior. Parks Canada had been given a new mandate: this was the first restoration of a residential building designated for its architectural value and the first major federal contribution to the work of restoring Old Québec.

Access to the site, which is now an integral part of the Fortifications of Québec National Historic Site of Canada, is restricted to staff, members of the Chambre de commerce and those visiting for business purposes. However, the courtyard and the outbuildings, where a restaurant is located, are accessible to the general public. A pamphlet and commemorative plaque provide a history of the site.