A British military base at Chambly in 1812 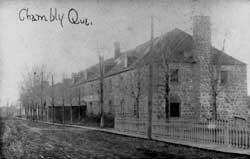 Have you noticed the small stone building, with white columns, at the edge of the Fort Chambly park? This is the guardhouse, one of the last architectural reminders of the existence of an imposing British military camp built in 1812 on what was called the king’s suburb.

Following the Conquest of 1760, British troops used Fort Chambly to guard against future enemy invasions from the south. However, in the 19th century, advances in means of transport meant that it became possible to get around Chambly; the fort then ceased to be a pertinent defensive installation. In this context, the old French fortification would be dedicated only to the storage of materiel.

However, in 1812, a conflict broke out between England and the United States, and the colonial authorities judged it necessary to equip themselves with installations for the accommodation of large military forces and their equipment. An analysis concluded that Chambly was the best place to station troops in preparation for deployments to strategic spots.

For this purpose, about 40 buildings were erected on the land east of the fort. This new military complex, truly a small village, provided for the lodging of infantry, cavalry and artillery, and it provided all the medical and administrative services required by the troops. During the 1812 conflict, as many as 6,000 soldiers stayed at this base! One can imagine the social and economic impact of this occupation on what was then the very small village of Chambly.

The military camp would experience two other phases of intensive occupation after the War of 1812: during the Rebellions of 1837-1838 and the War of Secession. However, the military development of St. Jean would result in Chambly losing its strategic importance, and the complex will be dismantled in 1869. During its existence, the Chambly military camp was one of the first places in Canada designed exclusively to serve a population living in the armed professions.