Joseph-Octave Dion, a man of passion 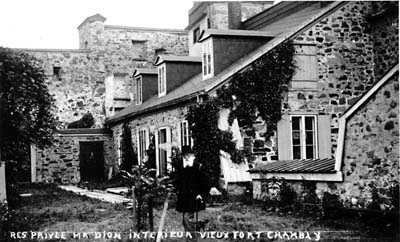 Joseph-Octave Dion (1838-1916) was born in Chambly and studied at the college there. Around the age of 18, he moved to Montreal and entered the world of journalism. Over the years he would become editor of different newspapers in succession: Nouveau-Monde, La Minerve, Étendard . He also wrote for La Patrie and the Monde illustré . Later he came back to Chambly as a correspondent for La Minerve .

In 1875, Dion started developing an interest in saving the old fort that had greatly deteriorated over the years. He loved history and was a regular contributor to the Bulletin des recherches historiques . He also had an interest in horticulture and was an avid promoter of colonization and agriculture.

Joseph-Octave Dion was at the heart of the ideological change that was taking place in French Canadian society. He became an ardent defender of the traditional model of rural Christianity in this land. He would devout the rest of his life to the saving and restoration of fort Chambly.

Towards the end of his career, Joseph-Octave Dion was honoured by the Ministry of Public Instruction of France and was named an Officer of the Academy. He died on February 12, 1916, at fort Chambly where he had lived for nearly 35 years.

There is no doubt that without his devotion to saving this precious artefact of New France, fort Chambly would be but a mere memory.