A stone fort to defend Montreal 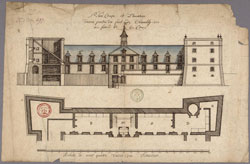 At the turn of the 18th century, Philippe de Rigaud de Vaudreuil, then the governor of New France, ordered a stone fort to be built at Chambly. His goal was to thwart an imminent British invasion. With the British forces’ numerical superiority over the French, the wooden fort at Chambly would not suffice to defend Montreal: what was needed was a stone structure that could resist rifle and cannon fire. Josué Dubois Berthelot de Beaucours, the future chief engineer of Canada, was put in charge of its design.

In response to this request, Beaucours conducted a strategic and topographic appraisal of the site. With the rapids forcing a portage, the enemy would not be able to transport heavy artillery or the supplies needed for a long siege. What Chambly could expect, then, was a short, swift assault. The high, thick walls were meant to counteract this threat.

Beaucours designed a masonry square with four bastions (towers). The curtains (walls) were pierced by slits at two levels for firing rifles. On the bastions, firing was terraced over three levels. In addition to the slits, wider openings provided for the firing of cannon. Though the fort’s vertical elevation may bring to mind high medieval walls, its architecture applies a basic principle of the classic fortification: the geometry of the flanking. Thanks to adequate flanking, all parts of the fortification can be defended from inside, thereby eliminating blind spots around the fort.

This stone fort, inaugurated in 1711, was occupied by the French until the Conquest. After the colony passed into the hand of the British, the latter occupied the fort until 1869, when it was permanently abandoned. Years later, Joseph-Octave Dion, a citizen of Chambly, began the process of restoring the fort. His efforts enabled the fortification to escape the ravages of time. It is still possible today to appreciate its architecture.