The Carignan-Salières regiment and the first wooden fort 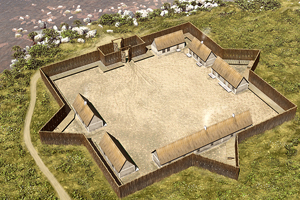 Fort Chambly’s visitors are generally surprised to learn that the first fort built on the site was made out of wood and not of stone, as it is today. This initial fortification, erected on the shores of the Richelieu River, was the work of Jacques de Chambly and his men from the Carignan-Salières regiment.

In 1665, in response to the colony’s inhabitants’ requests, Louis XIV sent 1,200 soldiers to launch a major offensive against the Iroquois nation. His goal was to put an end to the wars between the French and the Iroquois that raged in the second half of the 17th century. It was on this occasion that Jacques de Chambly directed the construction of the first wooden fort, at the foot of the Chambly rapids. Called Fort Saint-Louis, it would be part of a network of five forts erected along the Richelieu River, from Lake Champlain to Sorel.

The interior of Fort Saint-Louis contained a simple dwelling surrounded by small buildings to house the soldiers. These facilities served as a supply base during two raids conducted into Iroquois territory in 1666. Though the first expedition was a fiasco, the second one caused serious damage to Iroquois villages, which were forced to sign a peace agreement in 1667.

With the conflict over, nearly 500 soldiers settled in New France. They included Jacques de Chambly, who received a seigneurie from the king in the area near the fort that he and his men had built. This seigneurie, like the village to which it gave rise, would bear his name. But the military history of Chambly was far from over! In the mid-1680s, war broke out again between the French and the Iroquois. During this military episode, soldiers from the Compagnies franches de la Marine occupied Fort Chambly to defend the colony.'