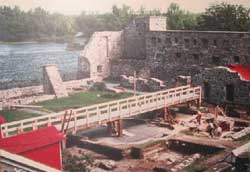 Fragments of dishes, shards of pottery, remains and foundations of former buildings hidden underground… A pile of old stuff? Nothing could be further from the truth! These excavated objects, revealed and interpreted by archaeologists, instead become genuine reminders in understanding the way of life of those who came before us. The Fort Chambly site is one of 10,000 sites in Quebec where archaeological digs have taken place.

At Fort Chambly, these digs have enabled us to find many artefacts, the most interesting of which are now exhibited in the fort’s museum. The jewel of the collection is a small ceramic coffeepot dating back to the French regime. Up to now, it is the only specimen found intact in Canada. These searches have also enabled us to reveal architectural vestiges of the early wooden forts; we now know their shape, dimensions and exact locations.

The digs at Fort Chambly go back to the late 1970s. Three seasons of intensive digs were conducted from 1976 to 1978 in connection with a major project to restore and enhance the building. Something particular about this archaeological undertaking is that the dig encompassed the entire fort and its perimeter up to a distance of 10 metres from the outside wall. Normally, only a certain proportion of the ground is dug, leaving unexamined areas for future searches. Considering the irreversible nature of the work that would be conducted on the building, a full examination was called for.

The subsoil of the Richelieu Valley has by no means yielded all its secrets! Excavations were carried out from 2008 to 2010 in Carignan at Fort Sainte-Thérèse, and others in Saint-Jean-sur-Richelieu until 2013. These excavations have enabled us to learn more about the wooden forts built in 1666. In addition, some maintenance work at Fort Chambly in fall 2011 led to an extraordinary discovery: the foundations of the first seigneurial mill, which was built in the late 17th century!