The site at Coteau-du-Lac represented a major point of transit for British military logistics efforts. Between 1781 and 1814, the army developed large-scale infrastructures on the site, which testify to the importance the colonial authorities attached to improving and protecting transportation and communications along the route linking Montréal and Kingston.

Coteau-du-Lac occupied a strategic position between Montréal and the Great Lakes. As a result, a pair of warehouses were built to ensure the smooth transit of provisions to the hinterland. The warehouses each measured 160 m 2 on three levels, thus making the site a supply hub.

Artist's rendering of a portion of the canal and warehouses as they likely appeared in 1816.
Illustration by Bernard Duchêne, 2002, Parks Canada

Moreover, the advent of the lock canal gave rise to an efficient transportation system which accelerated shipment of supplies to the remotest outposts. Goods were transshipped either overland or over ice from Montréal to Coteau-du-Lac during fall and winter. When spring arrived, provisions were instead loaded onto " batteaux ", which travelled back and forth along the St. Lawrence to Carleton Island (known today as Wolfe Island), which was located offshore from Kingston at the entrance of Lake Ontario. From there, they were transferred back onto larger ships, by which they were conveyed to their final destination. According to a register kept in 1780, close to 900 trips by " batteau " were made, thus ensuring shipment of necessities to the some 6000 people who were scattered throughout the various posts located along the Great Lakes.

Following the American Revolution and until the turn of the 19th century, the arrival of the Loyalists significantly spurred trade between Upper and Lower Canada. Military provisioning was soon supplanted by commercial transportation. Given the increased volumes of goods in transit, the British were required to use ever bigger " batteaux ". Eventually these were replaced by Durham boats, a type of barge originating in the United States which was much larger than the former " batteau ". The use of Durham boats entailed making a number of alterations to the canal system. In the early 19th century, the Coteau-du-Lac and Rocher-Fendu canals were widened and deepened, whereas the Trou-du-Moulin and Faucille canals were replaced by the Cascades canal. 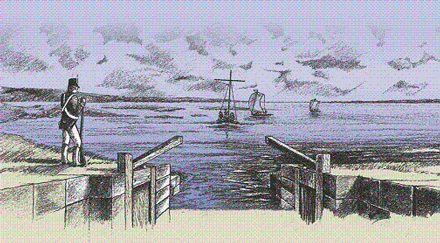 In 1812, conflict with the Americans broke out once again, thus lending new life to the military functions of the Coteau-du-Lac canal. Fortifications were built on the site, and a major garrison was stationed there. Throughout the entire war, this military post served as a major link between Montréal and Kingston. The conflict demonstrated the importance of improving communications and transportation between Upper and Lower Canada. Thus, between 1814 and 1817, the authorities embarked on a program designed to enlarge the military canals to accommodate Durham boats. The Coteau-du-Lac canal doubled in width, and the original three locks were reduced to two. Following these changes, commercial transportation picked up steadily, and also gained from a series of major repairs carried out thereafter between 1826 and 1832.

The fear of a new conflict with the United States, combined with the difficulty of mounting an effective defence of the St. Lawrence route, prompted the British authorities to develop the Ottawa River, a secondary route linking Montréal and Kingston, into a waterway. Upon their inauguration in 1832, the Ottawa River canals drained off a significant portion of the St. Lawrence canal traffic. When the Beauharnois canal, also along the St. Lawrence, opened in 1845, the commercial use of the Coteau-du-Lac canal came to an end. The country's first lock canal was officially abandoned in 1858.