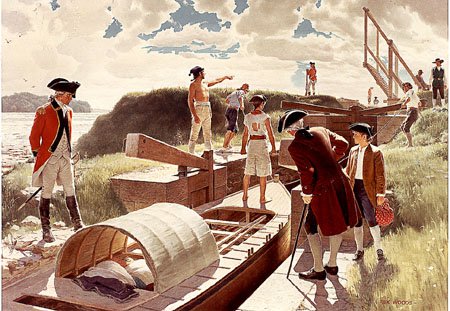 This picture evoques a period scene where some of the King's Royal Regiment soldiers of New York work around a boat coming into the Coteau-du-Lac Canal.
© Rogers Communications Inc / Rex Wood / 1967

The construction of the canal at Coteau-du-Lac began in 1779 under the command of William Twiss. Soldiers in the King's Royal Regiment of New York, a colonial unit made up of Loyalists, were mobilized to dig the canal out of rock using rudimentary tools and techniques. When construction was completed in 1781, the canal was more than 100 m long and 2.5 m wide. Each of the three locks was 12 m long and 1.8 m wide, with draft measuring close to 80 cm. Taken together, these locks compensated for a drop of about 2 m between the head and the bottom of the rapids. The canal was the first work of its kind in North America.

The Coteau-du-Lac canal went into full use from the moment it opened; a toll was even charged on boat traffic. However, the canal was unable to solve all the problems involved by river navigation upstream from Montréal. Three additional canals were built in the sector as of 1783, at the Faucille, Trou-du-Moulin and Rocher-Fendu locations. As the first canal work on the St. Lawrence, these canal infrastructures represented a valuable aid to navigation.