Meeting the challenges of the St.Lawrence

The interpretation centre offers the first contact with Coteau-du-Lac National Historic Site of Canada. Upon arrival, a team of interpreters will introduce you to the history of the site using maps, photographs and a scale model. You may also visit a display of some of the artifacts discovered during an archaeological dig which took place on the site. Finally, a lookout offers you an exceptional view of the site and the immensity of the St. Lawrence river.

Even as far back as paleohistoric times, the Amerindians made stopovers at (ti-ion wakwhta) "Where canoes are carried" to avoid the rapids. Their most intensive occupation of the site extended from 6,000 to 4,000 years ago. These early nomads lived from hunting, gathering and fishing. They travelled in bands of 10 to 20 people and, for a few weeks during the spawning season, camped and fished at Coteau-du-Lac. Today, Coteau-du-Lac offers visitors an enjoyable place in which to relax and contemplate their surroundings. 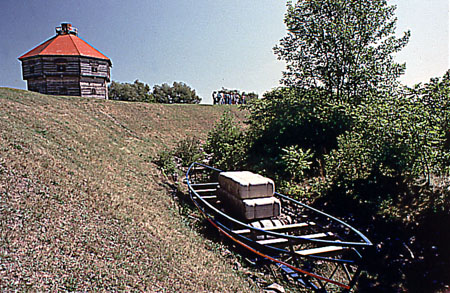 Built in 1749, the "rigolet" canal - a channel, actually - is the oldest extant vestige on the site, and the only throwback to the French regime. This rudimentary construction consists in a rock embankment which runs parallel to the shore and which in its time formed a corridor through which the voyageurs could manoeuvre their boats. The canal was the project built in order to avoid the rapids. A stylized boat placed inside the channel gives an idea of the scale of the work required to bypass the Coteau-du-Lac rapids.

As the first lock canal in North America, the Coteau-du-Lac canal recalls the birth of transport technology in this country. Functioning since the spring of 1781, the Coteau-du-Lac canal combines the two metres difference in water level, permitting boats and Durham boats to go around the rapids without danger. By walking through the hundred metres long remains, made of original stones and magnificently conserved, the visitor can discover the genius of the artists, the british military and the stonemasons, as well as the workings of this visionary work, precursor to the St. Lawrence Seaway.

Constructed on the promontory of a clover-leaf shaped bastion, the blockhouse is the symbol of Coteau-du-Lac and constitutes a prominent regional attraction. The replica of a British military building constructed for the War of 1812, it is recognizable by its octagonal shape. Inside, a thematic display includes scale models, original artefacts, a collection of pertinant objects and interpretive panels. The second floor offers an unrestricted view of the river and shows the strategic importance of the site. 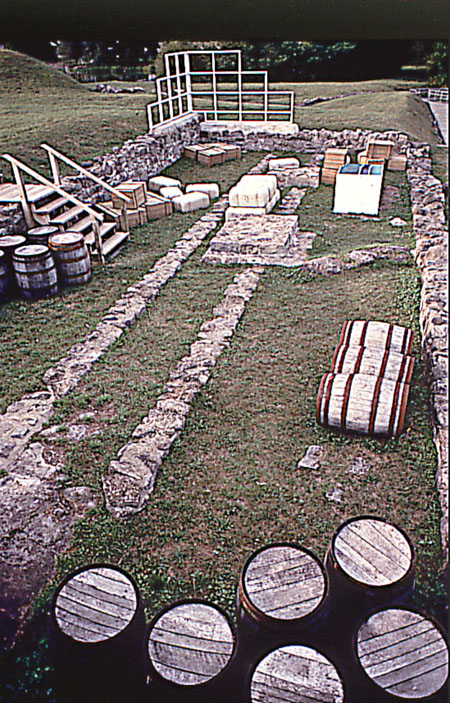 During the War of 1812, the British authorities constructed a fortification on the site to protect the lock canal and eventually, to protect against an American invasion. Although none of the original buildings were conserved, traces of the fortifications still exist. By following the footpath, the visitor is able to view the remaining foundations of the original military buildings; barracks, powder magazine, commanding officer house and warehouses as well as panels relating the history and use of each building. The remains of the man-made land shapes constituting the ramparts and bastions are still visible on the site and permit the visitor to discover the environment of the soldiers posted at Coteau-du-Lac.