A chronology of the events surrounding the battle

In this war against England, the United States attacked Canada, a British possession and a territory coveted by the Americans. From the outset, most military operations took place in Upper Canada (present-day Ontario), in the area surrounding the Great Lakes. In 1813, American strategy was chiefly directed at controlling the St. Lawrence River. American efforts thus focused on Montréal, and were designed to cut the supply lines to Upper Canada. Plans for a two-pronged invasion began to take shape: troops under General Hampton would take the route bordering the Châteauguay River, whereas General Wilkinson's forces would reach Montréal via the upper St. Lawrence Valley.

In late September 1813, Lieutenant Colonel de Salaberry, the officer in charge of defending the Châteauguay, attacked the American column led by General Hampton at Chateaugay Four Corners, in New York State. As he withdrew to Canadian territory, Salaberry blocked area cart roads with felled lumber, creating a series of serious obstacles for the oncoming American army. In the vicinity of Allan's Corner, he discovered ideal ground for establishing a set of trenches and other defence works.

On October 21, 22 and 23, 1813, close to 3 000 American soldiers under General Hampton and Colonel Izard crossed over the border and set up camp down river from the Spears farm, on the site of the present-day Ormstown Fair.

In the meantime, Lieutenant Colonel de Salaberry took up position along the north bank of the Châteauguay River. 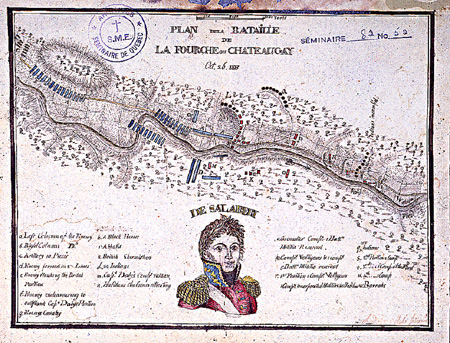 The location was riddled with a series of deep gullies; as well, the road was bordered on one side and by a thicket-covered swamp on the other. There, de Salaberry had an abatis. Then, further behind the main abatis, Salaberry ordered construction of four defence lines, the last of which was to protect Grant's Ford and safeguard the flanks of the Canadian positions. Salaberry also positioned a militia company under Captain Brugière on the south bank of the river.

On the evening of October 25, Colonel Purdy and 1 000 men were sent forward by General Hampton into the thick woods on the south shore of the Châteauguay River. Their objective was to circle around the Canadian defences and attack them from behind. Purdy's march proved exceedingly difficult. At daybreak of the 26th, his men had still not reached their objective. 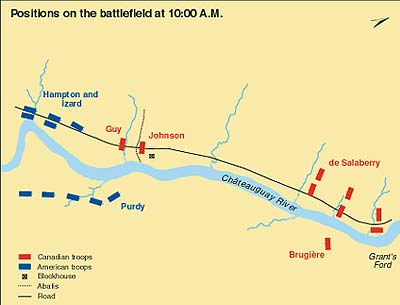 Hampton's troops clashed with Charles-Michel de Salaberry's lead party under the command of Lieutenants Guy and Johnson, who retired to the abatis and informed Salaberry that the enemy had arrived. 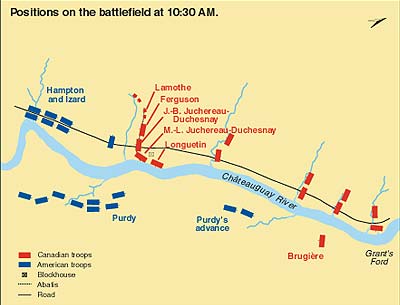 Hampton and Izard moved on the Canadian forces. Salaberry quickly advanced to behind the abatis, taking with him the light company of Captain Ferguson's Canadian Fencibles, two companies of Voltigeurs under Captains Juchereau-Duchesnay, a party of 22 Amerindians under Captain Lamothe, and a company of the 2nd Battalion Sedentary Militia of Beauharnois under Captain Longuetin. A total of 300 soldiers were to engage battle with the American troops. A reserve of 1 500 men were positioned behind the abatis.
Most of the reserve units were assembled behind the four Canadian defence positions. 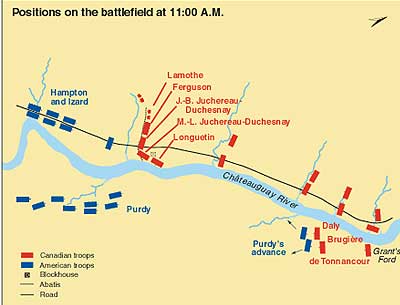 Further upstream along the south bank of the river, Purdy's advance guard attacked Brugière's company. Brugière received reinforcement from two companies of Selected Militiamen under Captains Daly and de Tonnancour, who mounted a sally against the Americans and put them to flight. 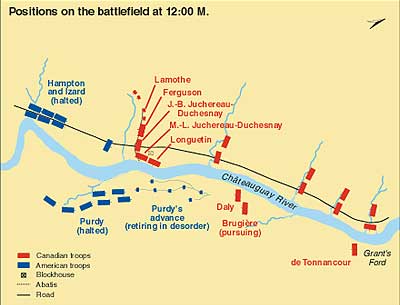 In the meantime, at the abatis located on the north bank, Izard's brigade continued to advance on the Canadians who had entrenched themselves behind the abatis. The fighting began in earnest. At one point, the fire became so intense that the Fencibles, who had been placed in front of the abatis, withdrew to a position behind it. Seeing this, the Americans believed that they had begun routing Canadian forces, and cried victory. 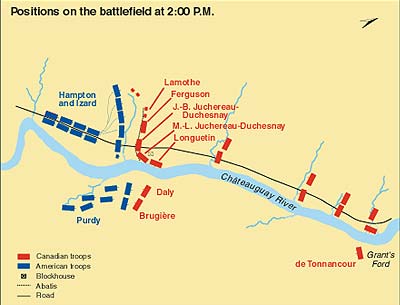 Acting quickly, Salaberry ordered his troops to shout back and sound the advance on the bugles in all directions so as to deceive the attacking party into thinking there were far greater numbers of defenders than was the case. The ruse worked: Izard's troops slackened their fire and even expected to be attacked. Salaberry took advantage of their momentary confusion to support his troops on the south bank of the river. 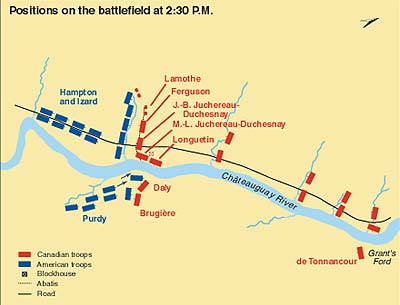 For some time now, Daly's and Brugière's companies had been engaging Purdy's troops. Daly succeeded in bringing his men into direct contact with the Americans, and led a bayonet charge against their units. During this charge, both Daly and Brugière fell with severe wounds. The Canadian militiamen withdrew.

Upon seeing the Canadian retreat, Purdy's infantrymen believed that victory was theirs and pursued the militiamen. In the hopes of encircling their adversaries, Purdy's men burst out of the woods and marsh on to the river bank, only to find themselves almost directly in front of the Canadian position on the north bank. Salaberry, who had been watching them, ordered his men to open fire. The enfilading musket shot was devastating: the Americans withdrew into the woods in a state of disarray. 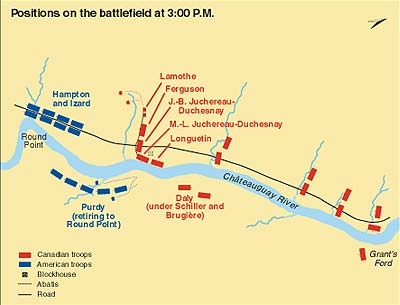 Hampton witnessed the rout of his men on the south bank. He ordered his troops to retire. The battle was now over.

The Canadian troops nevertheless expected a second attack. They spent the rest of the day and the entire night on the battle field they had only just been defending. This attack was never to take place.

During the following days:

On October 28, Hampton's troops retreated to the south, heading for Chateaugay Four Corners. On the 29th, the Americans had crossed back over the border.