In the evening of October 25, 1813, Lieutenant Colonel Salaberry sent his Chasseurs d’élite de Châteauguay, a company of Sedentary Incorporated Militia, under the command of Jean-Baptiste Brugière, an active and zealous captain, to the southern shore. The uniform and equipment of this company, paid for by the militia members and their captain, were similar to those of a body of incorporated volunteers. The soldiers of the Sedentary Militia, some of which were incorporated, had to supply their own blankets and utensils. If they didn’t do so, they had to do without. They could always stay warm at night between two haystacks.

Brugière’s mission was to establish a picket (sentinel) to protect Grant’s Ford and be ready for an eventual attack by the enemy on the flank. On October 26 at about 11 a.m., Purdy’s American forward troops surprised Brugière’s picket. Daly and Tonnancour’s companies, the Selected Embodied Militia, went to reinforce them. Daly and Brugière pursued the Americans who made a u-turn and withdrew in disorder, running into Purdy’s main column. They tried to reorganize after wading through the swampy ravine to just above the abatis line.

It is said that Purdy’s troops believed they were being attacked and fired on by their own retreating forward troops and fought against them as well as against the Amerindians who were there.

Today, it is possible to identify the third entrenchment, surrounded by agricultural land. 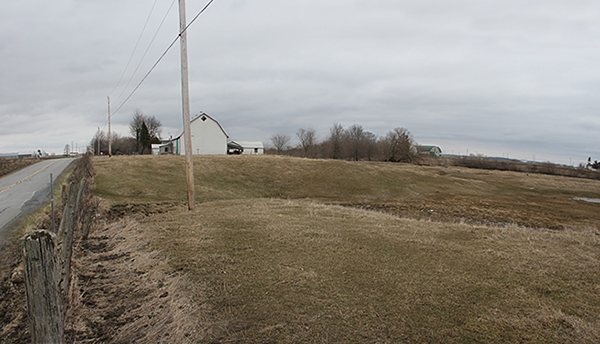 Overview of the Entrenchment 3 Spot