The main conflicts on October 26, 1813 took place here, on the firing line, in the heart of the battlefield.

The abatis raised on the top of the ravine

On October 24, 1813, Charles-Michel de Salaberry ordered his men to build an abatis, 3.2 km in front of his four entrenchments. Imagine a defensive line along the ravine by crossing the road to the river. In the Canadian defensive strategy, this abatis, made up of branches and scrub brush, enabled the troops to block access to this road on the north shore. The 90-degree angle of the abatis, part of which skirted the river, provided added protection of the south shore.

Salaberry had placed a detachment of the Canadian Fencibles in a forward position under the orders of captains Louis Guy and John Johnson in order to warn of the arrival of the Americans and protect the troops who were building the abatis. Behind this structure located at the top of the ravine, in dense forest, he deployed 22 Amerindians, a detachment of Canadian Fencibles, two units of Canadian Voltigeurs, and Sedentary Militia of Beauharnois, for a total of 300 men.

At this location, behind the line of fire, was a bunker under construction. Fairly small and made of logs, it helped give added protection of the troops.

The Americans, numbering 1000, opened fire on the Canadian forward position, on the morning of October 26. Later in the day, Hampton’s troops renewed the attack at about 2:30 p.m. when the shooting intensified. The Canadian Fencibles in the forward position returned to the abatis. At this time, Salaberry called on all of his men to sound the trumpet and shout in the woods in order to deceive the enemy. This ruse allowed the Canadians to prevent Hampton’s army from reaching the abatis, making them believe there were many more Canadian troops.

The troops of Lieutenant Colonel Charles-Michel de Salaberry stopped Wade Hampton’s army of 3700 regular soldiers on their way to Montreal. 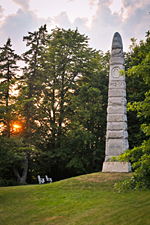 The obelisk, a monument erected in 1895 by the Canadian Parliament

It is said that Charles-Michel d’Irumberry de Salaberry, a career officer in the British Army, was an officer very demanding of his men and imposing strict discipline. The militia troops under his command were given the same treatment. During the shooting on October 26, 1813, Salaberry was involved in the combat himself, shooting at an American officer. This decisive victory over the American troops made Salaberry a popular hero. Over time he became a mythical figure and his name is inscribed in the pantheon of Quebec military glory. Many place names, like that of Salaberry-de-Valleyfield, are witness to the fact that his exploits made a strong impression on the collective memory.

Today, it is easy to identify the front line, located 0.1 km west of the Battle of the Châteauguay National Historic Site, at Allan’s Corners. The indoor lookout at the interpretive centre allows you to see the size of the battlefield. The scale model of the battlefield shows the different positions and movements of the troops on October 26, 1813. This allows the landscapes back then to be compared with those of today. Note the obelisk, a monument erected in 1895 by the Canadian Parliament in memory of those who fought in the Battle of the Châteauguay, located close to the front line.