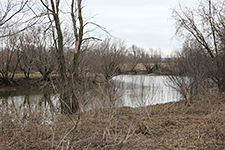 On October 26, early in the morning, Purdy’s troops reached the height of Pointe ronde, near the Canadian forward position on the north shore. The wetlands slowed their movements considerably during the night. Only Purdy’s forward troops continued on their way, letting themselves be guided to the abatis by gun shots fired from the other shore at around 10 a.m. Purdy knew he was still far from Morrison Ford.

Pointe ronde was the meeting point for Purdy’s troops, particularly the forward troops who, after having been surprised by Brugière’s picket, sent to protect the south shore, were being pursued by Canadian reinforcements made up of troops led by Jean-Baptiste Brugière and Charles Daly.

As well, these American troops endured the crossfire from both shores of the Châteauguay River, preceded by a bayonet charge at about 3 p.m. Seeing Daly intermittently through the trees, Salaberry called out his orders in French, and recommended responding in the same language so that the Americans wouldn’t understand. 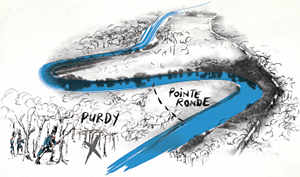 It is said that after the defeat, Purdy gathered his troops at Pointe ronde and built a floating bridge to evacuate the injured. The light infantry soldiers of Major Josiah Snelling were charged with this mission. They crossed the river to return to the encampment by the cart road, under intense fire from the Amerindians.

Today, it is easy to find Pointe ronde on the actual battlefield. It is located not far from the front line (0.6 km to the east), where the river runs along a wide curve that can be easily seen from the Rivière-Châteauguay road.