Path closure – Work of the MTMDET on Gouin Bridge

From October 9, 2017 until autumn 2020, the Chambly Canal path will be closed at Saint-Jean-sur-Richelieu between Lock No. 9 (rue Saint-Paul) and the Gouin Bridge.

The path was closed by the Ministère des Transports, de la Mobilité durable et de l’Électrification des transports (MTMDET) in connection with work to replace the Gouin Bridge. Users of the canal path in this sector are invited to take detours indicated on the municipal road network. Information panels with a map of the detour are placed at principal access points to inform and guide users.

For more information on the detours and construction work by the MTMDET in the sector, consult the web page www.quebec511.info

The parc des Éclusiers (Lock Keepers’ Park), a joint project of Saint-Jean-sur-Richelieu and Parks Canada, will be developed near Lock No. 9 in the area of Champlain, Saint-Paul and Foch streets. Construction started in September 2017 and completion is expected by the end of November, while planting will be done in spring 2018. More information on the Web site of the city of Saint-Jean-sur-Richelieu.

The following are among the improvements made to enhance visitor experience and the proposed service offering: complete reorganization of the trails, replacement of the park’s furniture and lampposts, planting of additional greenery, improvement of the park’s entrance, and lighting for its current commemorative monument, and more.

These new developments at the Chambly Canal will make it possible to ensure the quality and reliability of visitor facilities and to enhance the attractiveness of this site, which is protected by Parks Canada, in order to make it a place that is vibrant and dynamic.

Come visit the Place des Barges as of May 2017!

New developments at the Chambly Canal!

Chambly (Quebec), April 10, 2017 – In mid-October 2016, Parks Canada began rehabilitation work on the Chambly Canal retaining walls located at the entrance to the canal in St-Jean-sur-Richelieu. Over the coming months and until August 2017, a 132 metre section of the existing walls located between the marina Le Nautique and Rue du Quai will be rebuilt.

The work will not hamper navigation in the Chambly Canal and every effort will be made to maintain activities and services in the sector.

This project will significantly increase the useful life of the retaining walls, assets that are very necessary for navigation in the Chambly Canal and the holding of rich and varied activities along the banks.

Parks Canada is investing more than $50 million over five years in the Chambly Canal National Historic Site. This major investment will make it possible to upgrade numerous structural elements of the waterway, improve the experience for the 200,000-plus people who visit the site each year, and protect this exceptional heritage site while supporting local economies and contributing to the growth of the tourism industry.

Rehabilitation of the gabions at the Chambly Canal National Historic Site

Chambly (Quebec), November 9, 2016 – Work will be carried out along the Chambly Canal over the coming weeks until the end of April 2017, to rehabilitate the gabions that protect the banks from eroding, ensuring the longevity of these structures.

Gabions are metal cages filled with rocks that are used to stabilize the banks of the Chambly Canal. They are flexible, permeable structures that protect parts of the shoreline from collapsing due to erosion. Gabions protect the Chambly Canal’s banks along a stretch of approximately 5 km.

The work will be carried out in stages between Locks No. 3 and No. 8 and will require the consecutive closure of sections of the Chambly Canal’s path. While the work is underway, users are asked to follow the clearly marked detours and to respect the temporary signage.

Parks Canada is investing more than $50 million over five years in the Chambly Canal National Historic Site. This major investment is part of Parks Canada’s $3 billion infrastructure investment to support national parks, national historic site and national marine conservation areas. The funding will make it possible to upgrade numerous structural elements of the waterway, improve the experience for the 200,000-plus people who visit the site each year, and protect this exceptional heritage site for current and future generations to enjoy. 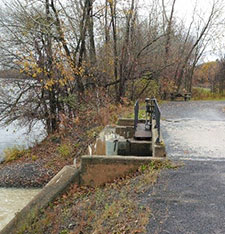 Weir n° 4 at the Chambly Canal

Chambly (Quebec), October 11, 2016 – Work will be carried out at the Chambly Canal National Historic Site on Weir No. 4, located between Bridge No. 7 and Fryer Island in Carignan, and Weir No. 5, located near Bridge No. 10 in Saint-Jean-sur-Richelieu.

The work will begin in mid-October 2016 and should be completed by the end of December 2016. It will include repairs to the concrete and replacement of mechanisms and gates. About ten street lamps will also be added near Weir No. 4 to secure the access for its operation.

These weirs are a unique glimpse into the history of the Chambly Canal and are also remarkable examples of the technology used in historic canals. The mechanisms being replaced, which maintain a heritage quality, will be put on display by Parks Canada and information panels will allow the public to learn more about these structures and the treasured cultural heritage of the Chambly Canal.

There are no plans for closing the path to pedestrians or cyclists, as the work will have only minor and periodic impacts. Work zones will be clearly identified and secured. Parks Canada asks the public to exercise patience and caution, in addition to respecting the temporary signage.

Work on the Fryer Dam

The Fryer Dam from yesterday... 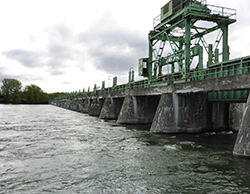 The Fryer Island Dam is built on 30 concrete piers.

Chambly, Quebec, October 3, 2016 - The “Fryer Island Dam” has marked the landscape of Carignan and of Richelieu since its construction in 1938. This imposing 347-metre long structure, which spans the Richelieu River from east to west, was designed as part of an ambitious project to make the Richelieu River the main waterway linking the United States and Canada. A number of factors would put an end to the project, including the outbreak of the Second World War in 1939 and the decision a few years later to canalize the St. Lawrence River. The Fryer Dam could never fulfill its function.

Today, the Fryer Dam remains a witness to the evolution of navigation and the engineering of canals in the first half of the 20th century. It is now under the responsibility of Parks Canada, which has carried out, in the summer of 2016, inspections on all the components of the dam. A drone was used to capture aerial images to create a 3D photographic modelling of the existing structure. By revealing its changes in shape, colour and texture, the 3D photographic modelling allows a precise analysis of the condition of the dam. Divers also conducted a visual inspection of the submerged parts of the piers and abutments of the dam and their aquatic environment. With the flow of water being elevated in this area, a boat equipped with 3D sonar that conducted underwater surveys was deployed to complete the work of the divers.

The work carried out this fall 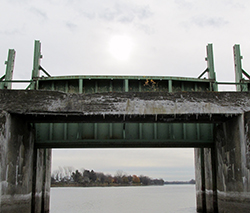 Work will be conducted this fall on the dam’s concrete apron, which shows significant signs of deterioration. Parks Canada will proceed with the demolition of the apron to ensure the safety of the public and protection of the environment. The work should extend until the spring of 2017. No closing of the Chambly Canal’s path is planned during this period, but minor restrictions may be necessary. Details about these restrictions will be communicated shortly.