Despite the passage of time and certain modifications made since the canal was opened in 1843, most of the structures have retained the authentic feeling that gives the whole canal site its distinctive character.

As part of Quebec's historic canals network, the Chambly Canal is the only working component that still retains its original route, buildings and operating mechanisms dating from the beginning of the 20th century. 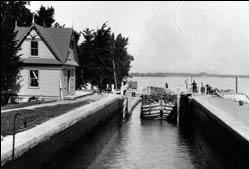 The Chambly Canal has nine fairly small locks. They were rebuilt towards the end of the 19th century, but their dimensions remained unchanged. Because most of them have retained the main architectural features of the era and are still operated by hand, they are fine examples of 19th -century maritime technology. Today, the nine locks feature old structures that are virtually unchanged, although restoration work has been carried out recently.

Some ten retractable bridges straddle the Chambly Canal. Except for bridge No. 1, which was rebuilt in the 1970s, and the new bridge No. 10, built in 1986, the canal bridges retain their original turn-of-the-century structures. Bridge No. 9, built on the Lachine Canal at the end of the 19th century, was installed on the Chambly Canal in 1923 after being made 16 feet shorter. Bridges No. 4 and No. 5 are still operated manually.

The logettes are distinctive architectural features of the canal. The Historic Sites and Monuments Board of Canada recommended to preserve the two former lockmasters' houses for combined locks Nos. 1, 2 and 3, those for locks No. 7 and 8 and the houses for bridges Nos. 2 and 5. They have retained their typical turn-of-the-century style. They were built in the Neo-Queen Anne style (locks Nos. 7 and 8 and near locks Nos. 1, 2 and 3). The houses at bridges Nos. 2, 4, 5 and 7 date from the beginning of this century but are in a starker, unadorned style. 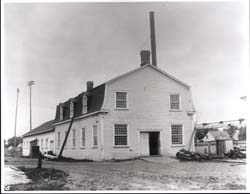 The old shop is a group of six buildings built between 1883 and 1960. Its distinctive feature is a mansard roof and revival windows. Since 1843, it has been used for the building of lock gates and the maintenance of Chambly Canal, as well as other canals and other Parks Canada properties. This building is recognized by the Federal Heritage Building Evaluation Bureau. 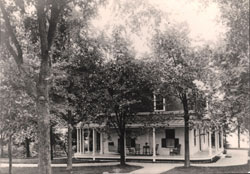 Located close to the combined locks, the director's house was built around 1867. It was used as an office by the toll-collector and the canal superintendent. In 1914, it was extended and converted into a residence for the director. This building has also been recognized as a heritage building by the Federal Heritage Buildings Review Office, because of its links with the growth and development of the Chambly basin, its emphasis of the canal setting, and because it is one of the canal infrastructure's surviving buildings and the only one associated with lock No. 2. Among its distinctive features are its mansard roof, veranda, balcony, windows and dormers.