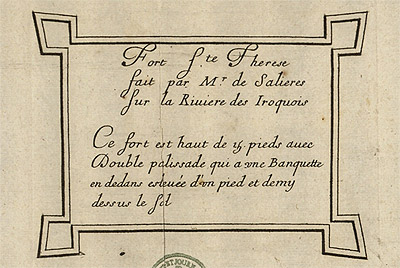 1665-1666: 1,200 men from the Carignan-Salières regiment build a series of five wooden forts, including Fort Sainte-Thérère, to protect the young colony and conduct war in Iroquois territory southwest of Lake Champlain.

1747: Building of the second Fort Sainte-Thérèse.

June 1760: Destruction on June 16 by American Rangers during the Seven Years’ War (1756-1763), and immediate reconstruction of the fort by the French army.

August 1760: After the fall of the fort on île aux Noix, the French army withdraws from the fort and burns it down to avoid its capture by British troops. The spot is retaken by the British, who abandon it permanently after the Conquest. The fort would never again be rebuilt.

More than 150 years later, the fort’s exact location had been forgotten. 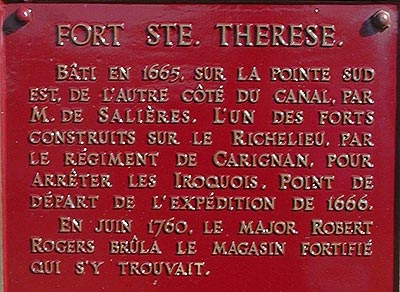 1923: The Historic Sites and Monuments Board recognizes the historic importance of Fort Sainte-Thérèse.

1930-1938: The building of the Fryer Dam disturbs the spot where Fort Sainte-Thérèse was thought to be located.

1964: Archaeologists conclude that locating the fort is impossible.

Around 1999 and 2000: Parks Canada researchers and local historian Réal Fortin develop the hypothesis that the vestiges of Fort Sainte-Thérèse are located on the properties of the Chambly Canal historic site, in the Fryer Island area.

November 20, 2007: The location of Fort Sainte-Thérèse is found on an aerial photograph dating back to 1938. 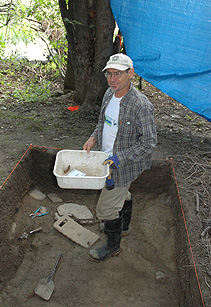 Start of the digs

2008: Archaeological probes confirm that there is at least one fort at the location studied.

2009: Archaeological digs of a greater scope confirm that three forts are built over each other at the same location, those from 1665, 1747 and 1760. Moreover, vestiges of two houses and a shed are discovered inside the fortifications.

To learn more about the digs...