The following year, his ships filled with provisions for a 15-month expedition, Jacques Cartier explored both shores of the St. Lawrence River beginning from Anticosti Island. He was aided in this endeavour by the two Amerindians he had captured during the previous voyage. On September 7, 1535, he dropped anchor on the north side of Île d'Orléans. Domagaya and Taignoagny, who had become Cartier's guides in these territories, now returned to their homeland and introduced Cartier to the people of Stadacona. The explorer offered the Amerindians presents. This meeting of the two peoples was a cause for numerous celebrations.

Not long after arriving at Île d'Orléans, Jacques Cartier decided to explore the surrounding country for the purpose of finding a suitable location in which to shelter his vessels. He discovered a natural haven at the junction of the Lairet and Saint-Charles Rivers. It was a particularly advantageous setting, as it prevented the ships from being dragged away by tides, and the surrounding hillsides provided shelter from wind. The explorer declared himself satisfied with the location, which was to become the present-day Cartier-Brébeuf National Historic Site, and had his two largest ships, the Grande Hermine and the Petite Hermine, cast anchor for the winter.

Cartier then began laying plans for travel upriver to Hochelaga (present-day Montréal). Domagaya and Taignoagny attempted to dissuade him from this course of action, and then flatly refused to accompany him. They thereby hoped to reserve the benefits of trading with the Europeans for the inhabitants of Stadacona alone. Despite the ruses and threats of the Amerindians, Cartier set out on his expedition aboard the Émérillion on September 19. The inhabitants of Hochelaga provided him a warm welcome. As no interpreters were to be had, the Europeans and the Amerindians had to use sign language. The French navigator developed the impression that there was gold beyond the Lachine rapids. He thus vowed to continue his exploration at some future date. 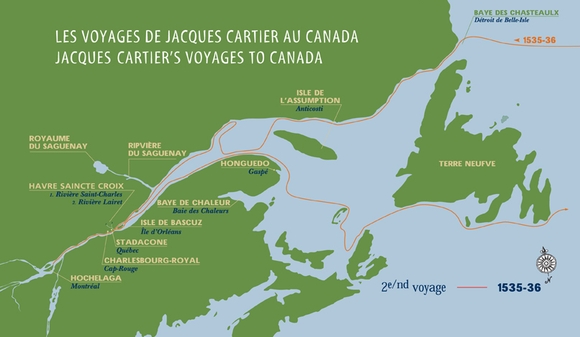