Travel the Canal from one end to the other!

Did you know? The canal’s path was ranked the third most beautiful urban circuit in the world by Time magazine in 2009.

The Lachine Canal’s path was opened in 1977, making it one of the oldest such paths in the Montreal area. It is also one of the most popular because of its superb green spaces.

Located in the heart of the bicycle network in the South-West sector of the island of Montreal, it follows the canal for 13.5 km, from the Bonaventure Expressway west of the Old Port to Chemin du Musée in Lachine.

This excursion is accessible to all since the route is flat. Experienced cyclists can travel from one end of the path to another in an hour.

The path is maintained from April 15 to November 15 and the park is open year round from dawn to 11:00 p.m.

Cycling on one of the world’s most beautiful routes!

Punctuated by green spaces, skyscrapers and centuries-old buildings, this spectacular trail will appeal to both real and would-be athletes on two wheels. Experienced cyclists can travel from one end of the canal to the other - from the Old Port to Lachine - in about 60 minutes.

But why hurry? Along the way at the Atwater Market a profusion of fresh food and produce will delight foodies.

Travelling along the Lachine Canal path is riding through a mosaic of landscapes that reveal Montréal’s unique and dynamic character.

The bike rental and repair service, MyBicyclette, is just steps from the Atwater Market.

Make the most of your visit! Rest areas and picnic tables are provided along the canal.

Parkings, restrooms and drinking fountains are also available on spot.

Fires and barbecues are prohibited. 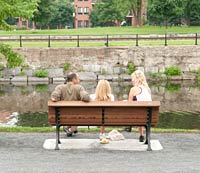 A pause on the bank

A trail reserved exclusively for walkers is accessible on some parts of the canal.

This footpath covered with rock dust and entirely flat, is easily accessible for mobility impaired people.

Great parks near the Canal

An exceptional site jutting out between Lake Saint-Louis and the canal entrance. Attractions include pedestrian and bicycle paths, an outdoor garden with 43 monumental sculptures and an arboretum.

Approach the Lachine Rapids and discover their history in a spectacular site recognized as a migratory bird sanctuary.