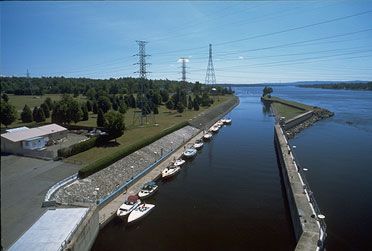 A close-up look at nature

The area considered here is located on the north shore of the Ottawa River, close to the village of Carillon. The climate of this site is characterized by precipitation that is above average for Quebec, owing to high humidity caused by the proximity of the Ottawa River.

The geology of the Carillon region includes a thick layer of strata consisting of dolomite, dolomitic limestone mixed with some calcium carbonate, shale and sandstone dating from the Ordovician period, belonging to the Beekmantown group, a deposit of fluvio-glacial origin, as well as reworked soil with poorly-defined boundaries.

The tree and shrub flora on this historic site consists partly of individual specimens or plantations of ornamental species and partly of elms that are native to the site. As a result, there is no plant community or related tree population.

Because the site is a developed one, with many visitors, few mammals or reptiles are found here. However, many bird species can be spotted. In the rapids opposite are a number of spawning grounds, resulting in a large ichthyological population.

The Montréal region has a hot, damp climate, mainly owing to the presence of the St. Lawrence and Ottawa Rivers. Waterways tend to stabilize temperatures by narrowing the range of variation. The southerly location favours a longer growing season and more hours of sunshine. The average temperature of 6o C and the prolonged sunshine duration (1 900 hours) result in good quality leafy plants, especially since the frost-free period is 31 days longer than Quebec's average. Annual precipitation is 92 cm, with about a quarter of that falling in the form of snow. During the summer, the prevailing winds come from the southwest, but on the actual Carillon site, the dam and bypass dam substantially offset the effects of these winds.

This territory is part of a major physiographic unit known as the St. Lawrence Lowlands. This wedge-shaped plain is bounded to the North by the Laurentians and to the Southeast by the Appalachians.

The rocks of the St. Lawrence Lowlands are largely masked by major deposits of clay, sand, pebbles and so on. These deposits have helped to level the countryside over which they are spread and their distribution has resulted in a whole range of soils with varying agricultural possibilities.

Carillon rests on a thick set layer of strata consisting of dolomite, dolomitic limestone mixed with some calcium carbonate, shale and sandstone covering the Potsdamian, which have been included in the Beekmantown group. Generally speaking, this formation consists of medium or dark grey dolomite, which is petrologically different from all other formations. The Beekmantown beds are almost horizontal. Usually, when they are distributed in this way, they slope towards the east, with dips of one to two degrees.

Rowe defines the Carillon region as being part of the Upper St. Lawrence forest area. According to this author, a natural forest covering this site should be dominated by the sugar maple (Acer saccharum), as well as the beech (Fagus grandifolia), the red maple (Acer rubrum), hickories (Carya sp.), the yellow birch (Betula lutea), the basswood (Tilia americana), the burr oak (Quercus macrocarpa), ashes (Fraxinus sp.), the American elm (Ulmus americana) and the hornbeam (Carpinus caroliniana).

The vegetation on the site consists largely of ornamental trees. The species occurring most often is the western white cedar (Thuja occidentalis), followed by sugar maples (Acer saccharum) and poplar (Populus sp.).