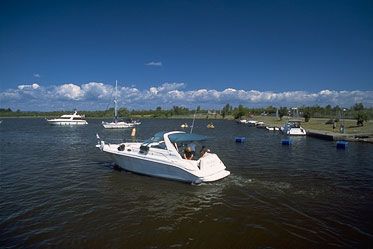 Boats upstream of the Carillon lock

The statement of commemorative integrity is a guideline for the planning and management of historic canals. The commemorative intent and complementary objectives are designed to ensure the protection of the resources that account for the site's national significance and are the direct reference for development orientations.

The commemorative intent is as follows:

"Carillon Canal is part of Canada's national system of historic canals. Located on the Ottawa River, the canal commemorates the role played by this waterway during the 19 th and the 20 th centuries, as part of a system of canals that links Montreal and Kingston on Lake Ontario, via the St. Lawrence and Ottawa, Rideau and Cataraqui rivers".

"Linked to the canals at Grenville and Chute-à-Blondeau, the original layout of Carillon Canal demonstrates the military role given to this waterway at the start of the 19 th century. The eventual expansion of the canal, between 1873 and 1882, confirms its commercial role established when it was first constructed".